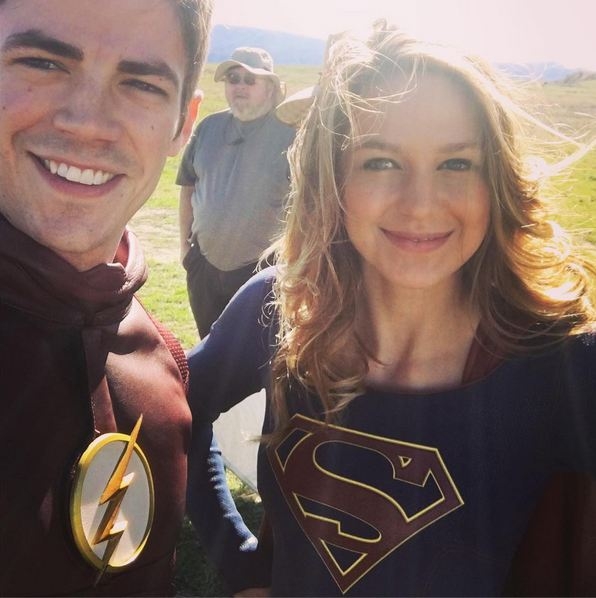 Its finally going to happen. The CW’s “The Flash” is crossing over to CBS’ “Supergirl” for the show’s March 28 episode.

Actor Grant Gustin who plays the fastest man alive on his own The CW show, posted on his Instagram a photo of him on the set of Supergirl, sporting a huge grin with Melissa Benoist, who plays Supergirl on CBS.

“Those two emblems look pretty good together,” he teased in the caption.

Gustin also shared a photo of the script for Supergirl episode 18 titled “Worlds Finest” with the story by Greg Berlanti. The script was written by Andrew Kreisberg and Michael Grassi.

“We are so incredibly excited to announce something that we have dreamed of happening since we starting making Supergirl. We want to thank Grant Gustin for making the time to come visit (on top of his already immense workload) and all of the folks at CBS, The CW, Warner Bros. and DC for working this out,” Greg Berlanti and Andrew Kreisberg, executive producers of both series, said in a statement.

The two executives also expressed their gratitude for all the journalists and fans who pushed for the crossover to happen and promised that they will work on making the episode worth the wait.

“As a fan, I would love it… but a lot of things would have to go right, a lot of people would have to say yes, for that to happen. It would have to be figured out soon, in the next month or so,” Berlanti said in an interview at the sidelines of the Television Critics Association winter press tour in the past.

It was initially believed that there would be some problems with the crossover with the two shows belonging to two different networks. However, it seemed that the clamor of the fans won out in the end and pushed the crossover to finally happen.

Both superheroes belong to the DC franchise.