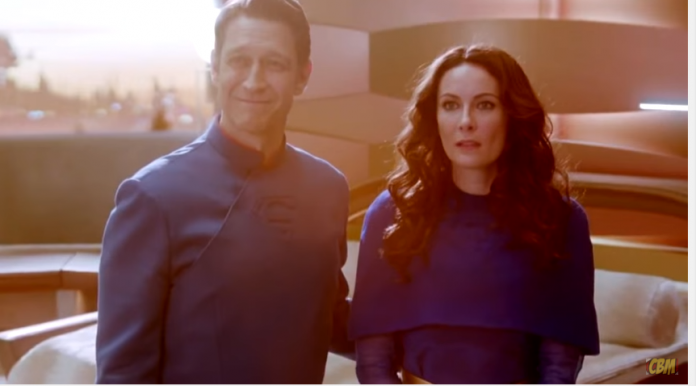 In the next episode of “Supergirl,” Kara revisits understroyed Krypton in her dreams and sees her family and friends alive ? but she is in danger of being trapped in it.

In the previous episode, the heroine was attacked by what looks like a hybrid plant with tentacles. In the upcoming installment, her loved ones need to find a way to save her.

In the promo trailer for episode 13 titled “The Girl Who Has Everything,” Kara’s sister Alex is shown talking to her aunt Astra, who identifies the foreign object that stuck to Kara as a telephatic parasite called Black Mercy. It traps its host in a perfect fantasy.

Kara is then shown in a white dress waking up to a white room, asking, “Where am I?” She then says, “I’m on Krypton.”

Spoilers Guide summarizes the conflict in the next episode: “Kara’s friends must find a way to save her life when a parasitic alien attaches itself to her and traps her in a dream world where her family is alive and her home planet was never destroyed. Also, Alex, Hank and the DEO must fend off a Kryptonian attack while Kara is out of commission.”

The episode seems to be a loose adaptation of Superman’s “For The Man Who Has Everything” by comic book writers Alan Moore and Dave Gibbson. TV Line shares that in the 1985 comic book release, a plant attaches itself to Superman and puts him in a coma. He then dreams of things based on his heart’s desire.

According to the same report, executive producer Andrew Kreisberg has related the difference between the two Kryptonian superheroes, saying, “For Superman it was a wish for something her never had. But for her, she wants something back that was taken from her.”

The end of the trailer shows Kara with her parents, and she says, “This isn’t real.”

On Tuesday, Feb. 9, viewers will find out if Supergirl gets to be saved from a nightmare dressed like a dream, and if so, who helps her to get out.

'The Affair' season 3 spoilers: Main characters to suffer the consequences...