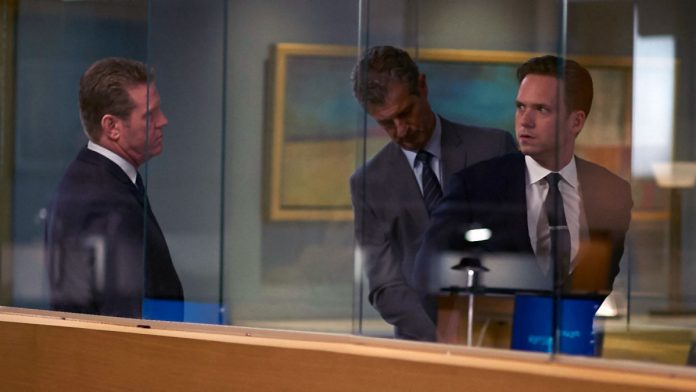 With the impending return of “Suits” this winter, a new promo has been released asking fans who they think sold Mike out. This is only one of the many question fans of the show have been wondering about since its mid-season finale episode titled “Faith” which aired last Aug. 26.

The episode ended with Mike resigning from the firm with Harvey’s blessing. The partners in crime hugged it out one last time before Mike walks out of the Pearson, Specter, Litt office. As he carries his belongings out with Rachel waiting for him in the foyer, two agents arrived and arrested him for conspiracy to commit fraud.

Followers of the show were then subjected to months of heavy thinking on what lies ahead with the remaining last six episodes of the season. There are a lot of people who have the motive to bring down Mike not just personally but as well as to hurt Harvey or the firm.

Aaron Korsh, the show’s creator, said that he thought it was the right time to have Mike’s lies catch up on him. “It felt like the right thing to do; you can only keep this thing under wraps for so long… Let’s have him be discovered and push on through and figure out what happens after that,” he stated in an interview with Hollywood reporter.

Korsh also confirmed via Twitter that the person behind Mike’s bust is not one of the six main characters. A fan asked him for a hint, and the producer gamely gave an answer. Although he narrowed down the list, there are still a couple of possible scenarios making fans dig deeper in their theories.

Fans also saw Donna revealing to Harvey that she is seeing someone else, and it is still yet to be seen how it would play a role in the overall dynamics of their already complicated relationship. As TV Line reports, Korsh confirmed that Donna was indeed telling the truth and not just trying to rile up the “best closer” in New York. However, he was also quick to add that it is still unknown whether the relationship will be serious or not, therefore giving Harvey-Donna fans some hope that the two will finally be ready to be together.

“Suits” will come back with episode 11 titled “Blowback,” which will deal with the different backgrounds of Mike and Harvey. Flashbacks will be utilized to show how Mike dealt with the untimely death of his parents and how Harvey coped after he told his dad that his mom was cheating. More importantly, the hunt for who sold out Mike will finally start as the hit USA series returns on Jan. 27.