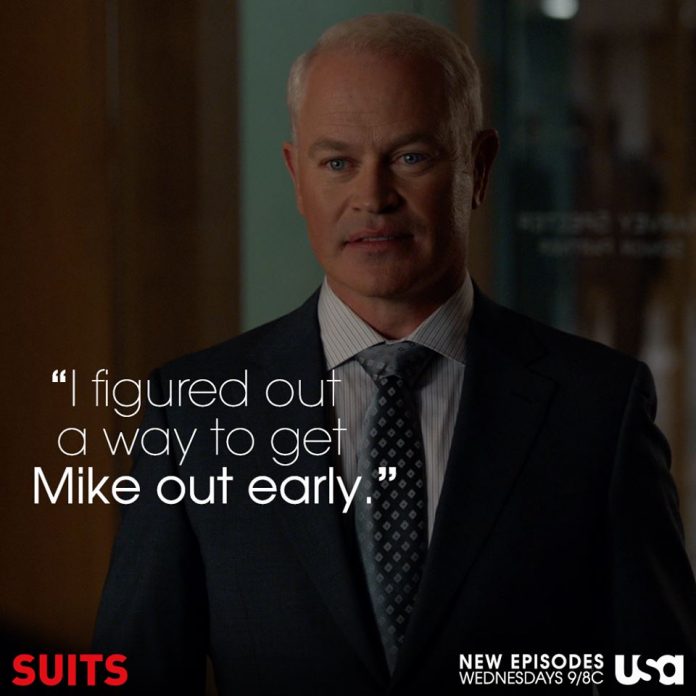 As prison life seems to be getting too much to handle, speculations suggest that Mike Ross (Patrick J. Adams) may be ready to strike a deal to reduce his sentence in the brand-new installment of “Suits” season 6.

Titled “Turn,” episode 4’s teaser clip opens with Harvey Specter (Gabriel Macht) seemingly furious at the fraudulent lawyer as he exclaims, “There’s someone in here who’s trying to kill you and I’m giving you a way out!” However, Mike seems to believe that the situation is not that simple, “What’s the catch?” he replies, seemingly dejected.

Another scene shows him talking to Donna (Sarah Rafferty) on the phone, warning her, “If someone finds out, I may not get back to Rachel [Meghan Markle] at all,” he says cryptically. Sean Cahill (Neal McDonough) then gives Harvey a 24-hour ultimatum before whatever they are planning goes bust.

Back inside the jail, during meal time in the mess hall, Mike states, “Something’s not right,” before he collapses to the ground. The video ends with his fellow inmate shouting for the guards to help.

Aside from Harvey and Sean, it is predicted that Mike will also be aided by his counselor Julius in a big way down the road. In an interview with Entertainment Weekly, actor Malcolm-Jamal Warner who portrays the character revealed that he auditioned four times to join the cast. He also teased that Julius and Mike relationship will “get a little deeper.”

“Julius is actually sharing more of his story and sharing more of himself with Mike and we find out some more about Julius’ past. The thing that Julius realizes as a counselor having been on both sides as a therapist and having had a therapist earlier in his life the way to get through to someone is by opening up to that person about yourself. So, we do see that there is another level that their relationship will go to,” he elaborated.

Season 6 episode 4 of “Suits” is slated to air on Wednesday, Aug. 4 on USA Network. The description reads, “Mike might take a deal to reduce his sentence. Jessica [Gina Torres] and Louis [Rick Hoffman] are going to have different ways of dealing with their new tenants, and Rachel is going to represent a death-row inmate.”

Netflix's 'Fuller House' news: Show follows up the story of the...

'Outlander' season 3 spoilers, news: Showrunner shares plans on how to...