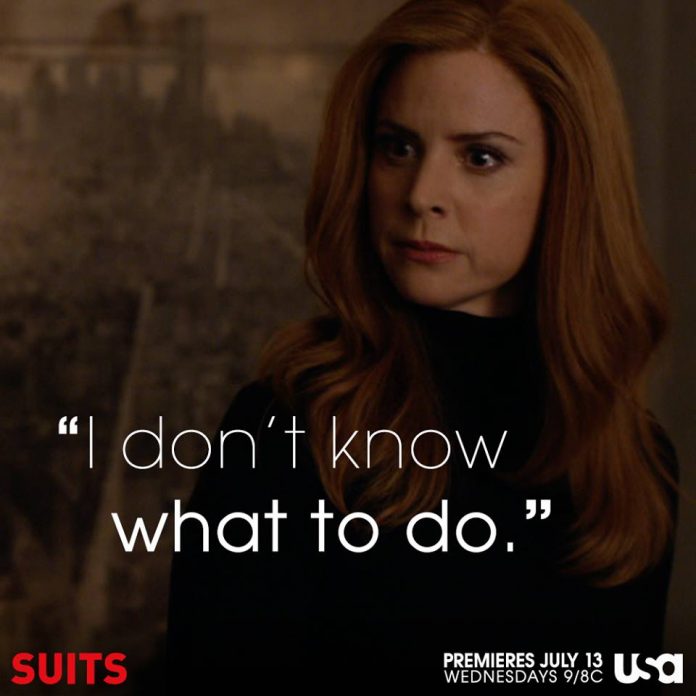 After the eventful premiere of “Suits” season 6, Mike (Patrick J. Adams) continues dealing with his new reality while the people he loves try to find a way to get him out and save the firm at the same time.

According to TV Line, episode 2 will open with Donna (Sarah Rafferty) being her usual awesome self and figuring out a way for Rachel (Meghan Markle) not to have to wait a month to see Mike in prison.

“We open Episode 2 on that. So that’s just a tiny example of the things Donna does to keep people connected,” executive producer Aaron Korsh hinted. However, he clarified that even though Rachel visits, they may not see each other just yet.

Adams seems to have confirmed that a reunion between the couple may not happen anytime soon. Talking to E! News last week, the actor said that he has not worked with anybody from the main cast except for Gabriel Macht, who portrays Harvey Specter.

Meanwhile, an interview with USA Network, Rafferty teased that her character will do everything she can to make sure what remains of Pearson Specter Litt pulls through during their most difficult time, “She’s gonna invest everything she has into saving the family that she has. She’s gonna rise to a whole new level of Donna bad-a**ery.”

The actress also shared Donna’s integral role in the firm’s survival as it is currently experiences serious duress, “Even though she is not dictating the decisions, she certainly knows how to get some of the men in her life to think that they are making that decision,” she added.

Season 6 episode 2 titled “Accounts Payable” is slated to air on Wednesday, July 20 at 9 p.m. EST. The synopsis reveals that Louis (Rick Hoffman), Jessica (Gina Torres) and Harvey will fend off a class action lawsuit, while Mike has no choice but to run afoul of a fellow prisoner.