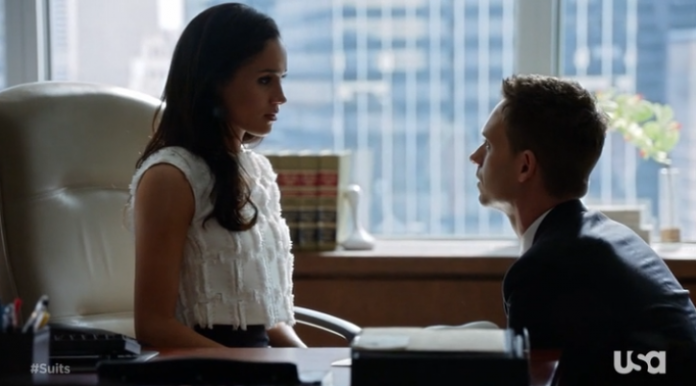 It has been nearly a week since legal drama “Suits” revealed the season finale to viewers. Now, everyone is already asking, “What’s next?” Series creator Aaron Korsh laid out the possibilities for season 6, when he and a couple of other cast members sat down with Yahoo TV.

Unfortunately, for viewers hoping that Mike can glide his way through prison, that will definitely not be the case when the show returns.

“He’s in prison. The last I checked, they don’t just show up and let you out. Look, I’m going to guess not many people thought Mike was going to end up walking into that prison,” Korsh said meaning that it may actually take enough time for him to be in prison to actually build a story of his own inside.

It would not be that complicated if Mike did not have someone like Rachel (Meghan Markle) outside. In the season finale, one of the last things Mike did was to break off his engagement to Rachel to spare her any complications of being in a relationship with someone in prison, most especially since she is studying law. It is also revealed that this is the scene which Korsh had to re-write as Markle thought that going through with the wedding does not really have that much impact. The showrunner also revealed that Mike and Rachel breaking things off had less effect in the finale, instead, they will be using it as springboard to stage something big next season.

Now that they are separated, Markle was asked what she thinks will her character be like moving forward to season 6.

“I’m sure we’ll see her more in her other worlds not just with her family, or at the firm, but we’ll also see more of her at law school. There are going to be more people in her world than we’ve been able to see,” Markle said adding that her character’s plot can only thick from here and might even go in every direction possible.

CarterMatt, on the other hand, speculates that the show will return sometime late June given that its last season aired June 24 on USA Network. Furthermore, the cable channel may also be looking to partner up the legal drama to the cyber-hacking show, “Mr. Robot,” which will come back for its sophomore year.