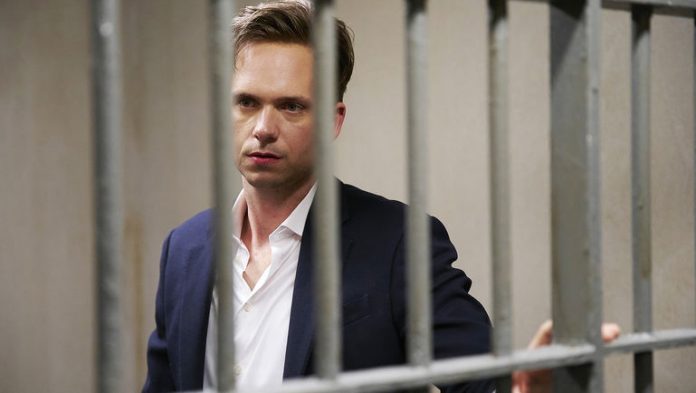 It is no secret that Mike Ross (Patrick J. Adams) will push through with the mandatory prison stint after he willingly entered the facility by the end of season 5 of “Suits.” In a recent interview with ABC, Adams shared that the series will continue to have him behind bars and so far, there is no kind of freedom for his character in the foreseeable future.

“All I know is what we shot so far and I’m still in prison,” the 34-year-old actor shared, adding that at the time of the interview, they have already shot the seventh episode of season 6. “They’re committing to it. We’re committing to it as a full storyline.”

If this particular plot point continues beyond episode 10, the quasi-lawyer would still be in the penitentiary during the mandatory mid-season break of “Suits.”

Show creator Aaron Korsh has been forthcoming that the writers of the show are not planning to have Mike work his way around the federal prison. This is very evident in the series of teasers that the show has been releasing in preparation for their small screen return in a couple of weeks. Nevertheless, Adams thinks that while there will be no pussyfooting on the situation, he does not think that the current premise will be stretched out to two full seasons.

“Do I think it’s going to be a full two years worth of the show? My guess is probably not,” Adams explained.

If that is the case, some kind of time jump will have to be incorporated into the narrative of the show. A reduced sentence or even a deal could be made with Mike becoming somewhat of a criminal consultant for the government which makes sense given his extensive knowledge about the law and not to mention his photographic memory.

As for the uncharted territory that the legal drama will now be exploring, the actor said that it was the perfect timing to make the sharp turn.

“The show needed something and I think most shows get to a point when you get to five years and you’re starting to kind of maybe repeat a little bit; you feel yourself going down the same path,” Adams stated.

“Suits” season 6 will break ground on July 13 on USA Network and will air every Wednesday night at 9 p.m. ET moving forward.