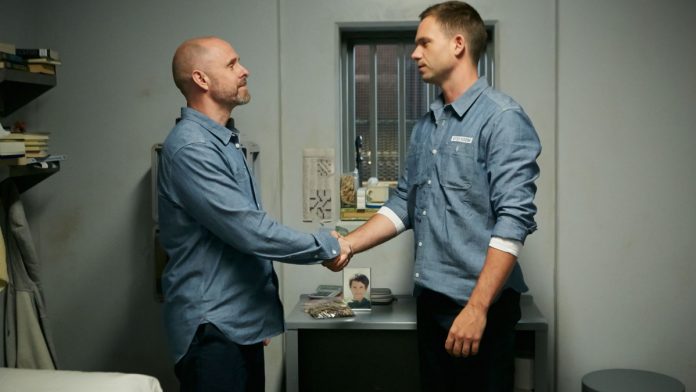 “Suits” season 6 is headed for more chaos for both Mike (Patrick J. Adams) and the rest of Pearson Specter Litt. In the upcoming episode, it appears that Rachel (Meghan Markle) may experience the hardest blow when she is presumably put in danger.

If things are not stressful enough for the paralegal, things will get a little bit more chaotic when she gets an uninvited guest in her home. While the promo trailer for the forthcoming episode titled “Back on the Map” suggests that the unknown visitor is a visible threat given Rachel’s facial expression, it turns out that the person behind her door is her fellow student from Cambridge. Nothing more has been given in terms of this particular encounter, but fans can expect that it will be a pivotal for Mike’s fiance moving forward.

Inside the prison, the threat that is Frank Gallo (Paul Schulze) continues, as he is still relentless in trying to get under Mike’s skin. In the last episode, the quasi-lawyer had some close calls with Gallo who almost tried to beat him up via his henchmen. Fortunately, Mike seemed to have found a real friend and cellmate in Kevin Miller (Erik Palladino) who can potentially help him to dodge Gallo’s wrath. But before fans can settle down, knowing that Harvey (Gabriel Macht) may have found a way to have his old nemesis out of the penitentiary, it does not seem like it actually worked. The sneak peek also gives a glimpse of the convict still hounding Mike even when he had nabbed a job at the usually crowded prison kitchen.

Back at the firm, the three name partners continue to scratch their way to re-establish themselves. Jessica (Gina Torres), who has mended ties with former senior partner Jack Soloff (John Pyper-Ferguson) and even impressed Robert Zane in the last episode, appears to be on the right track making more allies than foes.

The official narrative for this week’s episode reads, “Mike tries to remain safe without breaking Danbury’s unwritten rules; Jessica and Harvey try to land a whale; Louis searches for an office tenant; and Rachel faces a fellow student.”