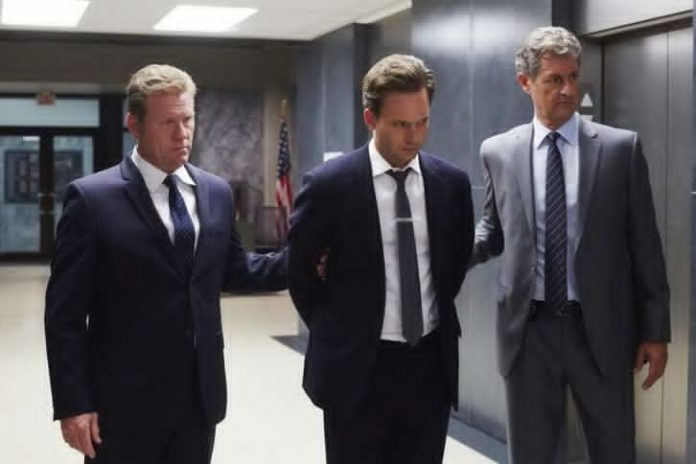 Later this week, legal drama series “Suits” will be back for the remaining episodes of their fifth installment, and fans are in for a bit of a roller coaster ride.

The season 5b opener, titled “Blowback,” will pick up on where the midseason finale ended back in August, with Mike in handcuffs and escorted by agents outside of the Pearson, Specter, Litt building. But other than Mike’s budding locked up time, there are other subplots to look into coming Wednesday night.

Arguably, the second most shocking revelation of “Faith,” was when Harvey (Gabriel Macht) told Jessica (Gina Torres) that he is stepping down from the firm. A decision coming from a deal he cut with Charles Forstman (Eric Roberts) who was later revealed to be the one backing Daniel Hardman (David Costabile) and his attempted shakeups of the firm. At first, Jessica was obviously adamant at refusing Harvey’s decision, but Harvey seemed to have already made up his mind.

This, however, will be addressed in later episodes as the firm will focus on one pressing matter – get Mike out of jail. In the most recent teaser trailer for the upcoming episode, Harvey and Donna (Sarah Rafferty) partner again to devise a plan, but DA Anita Gibbs (Leslie Hope) will not make it easy for them. Other snippets from the 30-second video clip revealed Louis (Rick Hoffman) and Jessica going at it with Harvey – presumably with the former staying loyal to Mike. Rachel (Meghan Markle), on the other hand, revealed that the DA office is cutting a deal with Mike which will test his loyalty to Harvey.

In a report by Carter Matt, a strategy to keep Mike out of prison for years is said to be put in place as springboard for the show’s 12<sup>th episode, titled “God’s Green Earth,” airing on Feb. 10.

By the looks of it, “Suits” is going to be more focused on how Harvey and team can get Mike out of rut he is currently in instead of going after who ever sold him out. Fans can expect no less than a thrilling phase as teased by the trailer clip for the comeback episode.