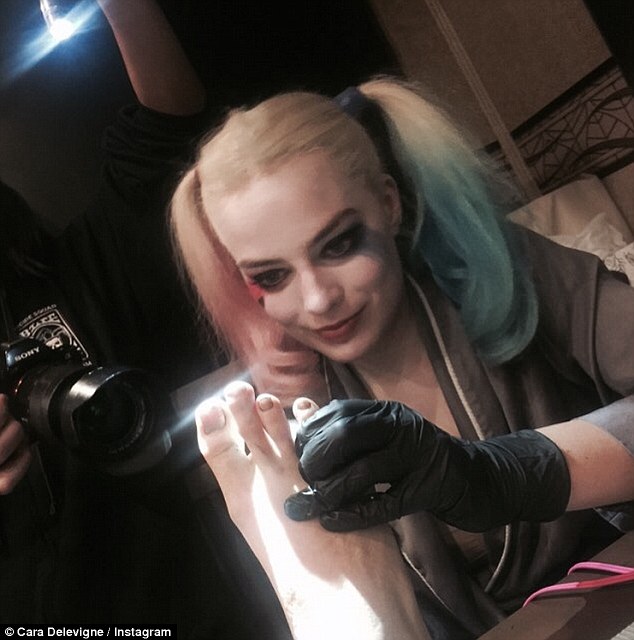 It seems like cast members of DC’s Suicide Squad are taking their bond to a whole new level as another cast member got herself a ‘Skwad’ tattoo.

It was reported by Comicbook.com that Cara Delevigne got herself the same tattoo as fellow actors Joel Kinnaman who plays Rick Flagg and Jai Courtney who plays Boomerang and film director David Ayer at the unofficial Harley Quinn tattoo parlor. Delevigne plays the role of Enchantress for the movie, and posted a photo of her giving and getting ink at the makeshift tattoo parlor of Harley Quinn herself, Margot Robbie.

Aside from bonding with tattoos, the cast have also bonded over doing good by celebrating the end of production with a visit to a little girl’s lemonade stand which she put up to raise money for her brother who has Angelman’s Syndrome.

Star Jai Courtney posted on his Instagram his and Margot Robbie’s photo with the little girl and her brother calling her a real superhero. The post also encouraged people to support the Foundation for Angelman’s Syndrome.

Meanwhile, Robbie shared in an interview that no matter how impressively menacing Jared Leto’s version of The Joker is on screen, he was even scarier without the make up.

“What he’s doing with the character is so cool. At first it was kind of confronting [to be up close] but now I’m so used to it. I think if I ever saw him out of make-up now I would be really confused,” she said to the New York Daily News.

“I saw him out of make-up once and I was actually petrified of him. I was too scared to go up and didn’t know who that person was, and when he got back into his makeup I was far more comfortable,” she said.