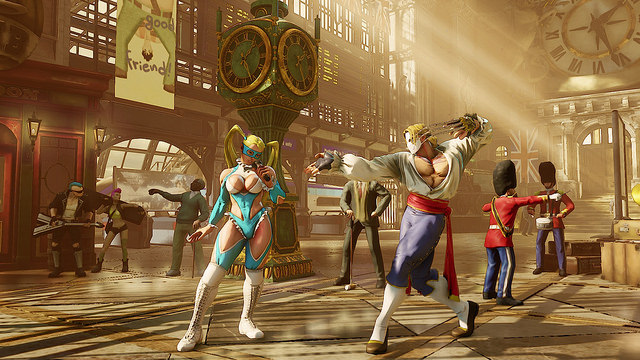 Rainbow Mika, the latest addition to the roster of fighters coming for Street Fighter V, shows off just how powerful her moves are with her V-Skill on!

In a gameplay video captured by Khaos Gaming, Rainbow Mika shows of her V-Skill, called “Mic Performance”. Here, R. Mika pulls out her microphone and delivers “heart-pumping monologue” to the crowd. Each part of the monologue gives R. Mika a buff, shown through the ripple effects on her. The longer her performance goes, and the longer the buttons are held down, her punches and throws becomes more powerful. And in the gameplay video, with R. Mika at full power following her V-Skill, the young wrestler was able to finish off a full health Ryu with just two hits.

“Hey! First thing you do is hit the cardio.

Next thing, go for full on strength training.

Don’t do any less than 3 sets a day

Each time? Change the routine daily

You’ll be all muscle

Rainbow Mika joins the roster of fighters for the upcoming Street Fighter V. The character was first introduced in Street Fighter Alpha 3, and was not included in any other franchise game until now.

Rainbow Mika in Street Fighter V is described as: “As a flamboyant young wrestler, Mika dreamed of one day becoming a star in the ring, much like her idol Zangief. Training under the strict tutelage of her coach, she traveled the world engaging in random matches with street fighters in order to spread her name and popularity.

“R. Mika’s wrestling prowess will be on full display in Street Fighter V, as she dazzles opponents with a large variety of high-flying moves. This time around, her wrestling tag-team partner Nadeshiko also assists in the fight!”

Street Fighter V will come to the PS4 and PC early 2016. Other officially announced characters include Ken, Cammy, Birdie, Ryu, Chun-Li, M. Bison and Charlie. The first new character for the game was revealed to be Necalli, a brawler who looks to be very savage and is looking very aggressive in combat, too. His V-Trigger transforms his hair and gives it a strong, reddish glow.