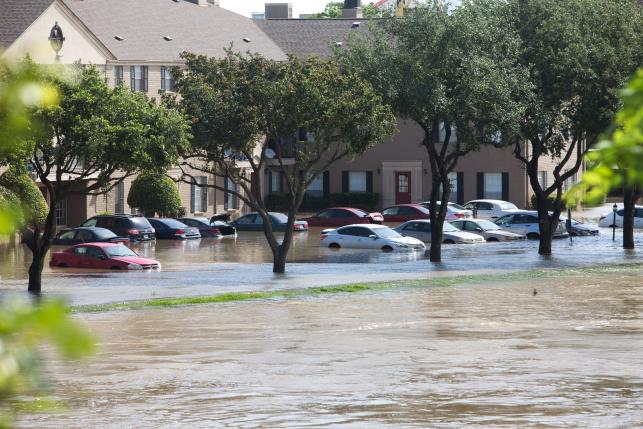 Torrential rains have killed at least nine people in Texas and Oklahoma, including two in Houston where floods turned streets into rivers and led to about 1,000 calls for help in the fourth-most populous U.S. city, officials said on Tuesday.

The death toll is set to rise with numerous people missing in Texas after the storms slammed the states during the Memorial Day weekend, causing record floods that destroyed hundreds of homes and swept away bridges.

“There are still some significant areas of really devastating flooding in Houston,” Mayor Annise Parker said at a news conference, adding most of Houston is high and dry but advised people to stay home.

More than 1,000 vehicles were submerged in the Houston floods and people took instead to bicycles, kayak and surfboards to navigate water-covered streets. The Houston Fire Department brought about 500 people to safety in boats, local media reports said.

President Barack Obama said on Tuesday he had assured Texas Governor Greg Abbott that he could count on help from the federal government as the state recovers from the floods.

Abbott has declared a state of disaster in 24 Texas counties.

Abbott said he has deployed the state’s National Guard and was worried the death toll could rise.

“We still have countless people who are missing,” he told cable news station CNN.

Twelve people are confirmed missing and about another 30 are unaccounted for due to flooding that hit along the Blanco River in central Texas, county officials said. The missing were from two families whose vacation home was swept off its foundation in Wimberley, a town about 30 miles (50 km) southwest of Austin.

Search dogs and boats were being used to search for the missing. The river rose so quickly and with such force, it caused a flood gauge to break, Hayes County officials said.

There was no damage estimate available for the state, which has a $1.4 trillion-a-year economy and is the country’s main domestic source of energy as well as an agricultural and manufacturing power.

Houston resident Dutch Small, 40, climbed onto the roof of his car when the water came up to his knees inside his vehicle and was eventually rescued by a passing tow truck driver.

“It happened so fast. Every person that died in the flooding, I know what was going through their minds. They didn’t measure the threat accurately. They were like me,” Small told Reuters.

More bad weather was expected with the National Weather Service issuing a flash flood warning on Tuesday for Houston as a line of thunderstorms moved along the Gulf of Mexico coast toward Florida. It said there was a high chance of more rain and thunderstorms for Texas this week.

One of those killed was an 18-year-old girl whose car was swept away by flood waters as she returned home from her high school prom, police in Devine, Texas, south of San Antonio, said.

More than 170 flights had been canceled as of 2 p.m. CDT at airports in Houston and Dallas, some of the nation’s busiest, as blocked roads made it difficult for workers to get to their jobs. A sinkhole also closed a runway at the Dallas/Fort Worth International airport.

About 100,000 customers were without power throughout the state on Tuesday morning due to high winds and rising waters that caused power poles to snap.

About 11 inches (28 cm) of rainwater fell in Houston on Monday while parts of Austin were hit by as much as 7 inches (18 cm). Helicopter crews in both cities pluck people to safety who had been stranded in cars and on top of buildings.