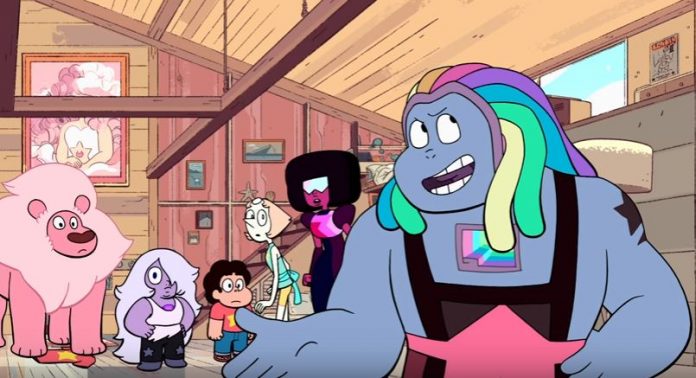 Tonight’s episode of “Steven Universe” will feature an “Orange Is the New Black” star as Uzo Aduba, who plays Crazy Eyes in the popular Netflix series, will voice a new Crystal Gem in the Cartoon Network animated series.

Aduba guest stars as Bismuth in the episode of the same name. According to Entertainment Weekly, the 22-minute special will introduce the purple-skinned, rainbow-haired gem, who fought alongside the other Crystal Gems in the battle to save Earth more than 5,000 years ago. A.V. Club reports that Bismuth wound up being trapped inside Lion’s mane, and when Steven accidentally frees her, she has to adjust to a brand new reality.

In the promo clip for “Bismuth,” the gem laughs as she says that everything has changed. She then looks for their other comrades and asks where they are.

The Crystal Gems look at each other and they teleport to the battle site. Bismuth gasps and sees that strawberries of all sizes have grown all over the place.

Pearl tells her that she’s been out for 5,300 years and that they were able to save the Earth. Bismuth interrupts and asks if they’re all that’s left of the rebellion, and Pearl confirms it with a look while tears run down her face. Bismuth cries, and later, she is comforted by Garnet and Pearl.

The next new “Steven Universe” episode airs next week on Aug. 8, and according to leaks, episode 22 is titled “Beta.” The story will focus on Amethyst and Steven, and Amethyst acts strangely when she and Steven visit friends in the country. It will air back-to-back with another episode titled “Earthlings.”