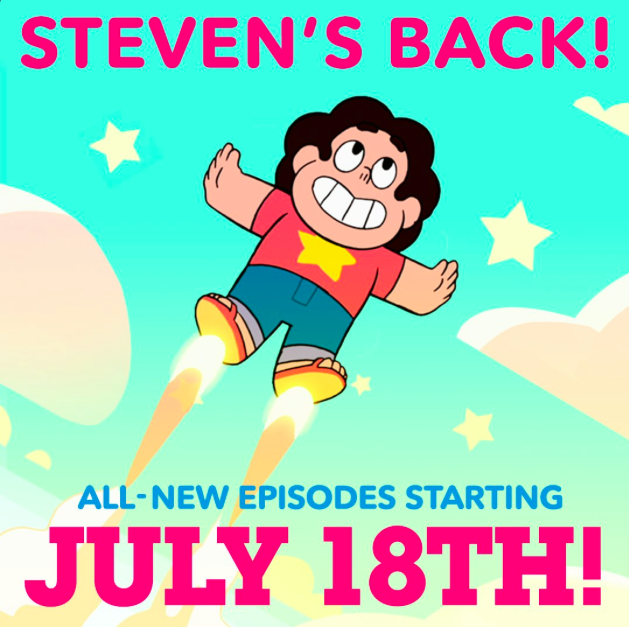 The long wait is over as Cartoon Network recently confirmed that new episodes of “Steven Universe” season 3 dubbed “The Summer of Steven” will air this month.

The network took to Twitter to announce that the titular character and his Crystal Gem friends will return to the small screen on July 18 after more than a month-long hiatus. A new poster of Steven flying up in the air was released and captioned, “Are you ready?”

Instead of the usual erratic schedule for the animated show, which sometimes releases a bunch of episodes over a week or weekly episodes in a month often with huge gaps in between, the upcoming run will have a more regular screening schedule.

Writer Matt Burnett confirmed that the airing will become more permanent, “The promos are out there Steven Universe is airing new episodes almost every weeknight for over a month all of Season 3 is coming!” he tweeted.

One of the teasers has the narrator stating, “Are you ready for Steven?” followed by the protagonist excitedly saying, “It’s great to be back!” The voice-over continues, “How about a whole summer of new ‘Steven Universe?'” to which Peridot answers with, “Oh, let’s follow this logic!”

The footage reveals that there will be a new episode every day starting July 18, “What a time to be alive!” Connie Maheswaran muses. A montage then hints on the exciting new journey that the friends will embark on together as the clip ends with Steven assuring them, “I promise this will be the most fun you’ll ever have!”

Cartoon Network has yet to share the exact airing of the episodes but a fan site alleges that the specific air dates for the installments are as follows: “Steven Floats/Drop Beat Dad” on July 18, “Mr. Greg” on July 19, “Too Short to Ride” on July 20, “The New Lars” on July 21, and “Beach City Drift” on July 22.

All episodes will be shown at 7 p.m. EST. However, since there is official word from the network, available information should be taken with a grain of salt.

'This Is Us' spoilers: Milo Ventimiglia talks about emotional reveal of...