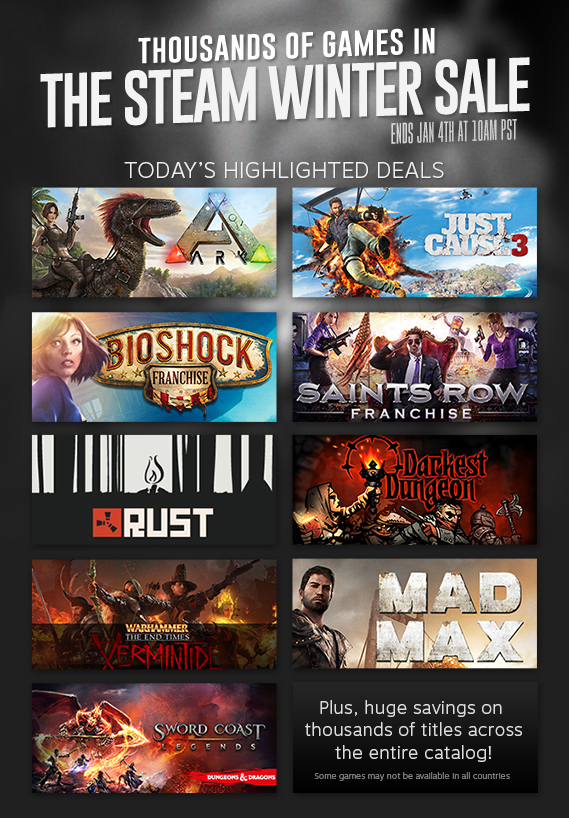 Even if Christmas is officially over, deals and sales are still going on. Online gaming portal Steam is only getting started with their annual major sale which includes a lot of fan favorite titles.

The Internet-based digital distribution platform developed by Valve Corporation usually holds a winter promo at the end of every year towards the first few days of the upcoming year. This year, Steam will be upping their game by putting in some of the biggest games in the past year including “The Witcher 3: Wild Hunt,” “Grand Theft Auto V,” “Metal Gear Solid V,” “Rocket League,” “Civilization: Beyond Earth,” “Ori and the Blind Forest,” and “Call of Duty: Black Ops III.”

Furthermore, some game series offered sales for every title in their franchise which is perfect for those who have previously bought other members of sequential games and are just waiting to have the other ones go on a price drop.

With the popularity of “Star Wars,” Steam will put a plethora of games related to the franchise like “Force Unleashed” and “Knights of the Old Republic” on sale. These titles can even be seen on the landing page of the website.

Unfortunately, far more established games like “Fallout 4” and “Tom Clancy: Rainbow Six Seige” are not included in this year’s deal offerings. PC World tried to explain the notion behind this decision via saying that Valve is trying various formats to find out which one is the more effective. This time, the gaming platform decided to keep the prices the same from the first day they debuted the sale list up until its last day on Jan. 4.

Check out the complete run down of all the games with slashed off prices on the official Steam website.