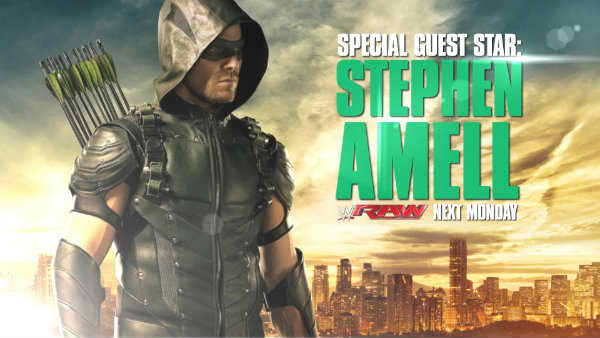 Arrow actor Stephen Amell will finally be confronting Stardust in the ring, following a long series of exchange of heated tweets to each other.

As reported by the official WWE Network, Amell will be going to Seattle to appear on RAW on Monday, August 10, to finally settle all score with the cosmic superstar.

The heat between the cosmic superstar and the Arrow star started with Stardust making a tweet challenging Stephen Amell to “come to RAW”. At first, Amell was cool with all the taunting from Stardust.

At his match on Memorial Day, Stardust singled out Amell, who was there in the crowd watching. He then remarked that his new rival is really the Green Arrow (Amell’s character). He even made a tweet showing an implied “hitlist” with “Green Arrow” as the next target. This is after he defeated Neville.

At the San Diego Comic-Con, Amell introduced his revamped characterfrom the entirely different costume, to a change in the name. Being a long-time WWE fan, he noted that the character entrance he made was his first opportunity to do such a thing “WWE style”.

The actor told Stardust, again via Twitter, that he can insult him all he want, but talking foul of The Green Arrow is another thing entirely. Stardust, however, continued taunting Amell, in his interview, appearances, and on Twitter.

Amell, seemingly getting sick of it all, told Stardust that even though he’s not a wrestler, he would be coming to the ring to “punch you right in the mouth”.

The heated exchange between the two seemed to have reached the climax when Stardust delivered Amell’s character catchphrase, when he defeted R-Truth. He said: “R-Truth, you have failed this city!”

Amell, confirming that this is the last straw, then responded that “it’s on”.