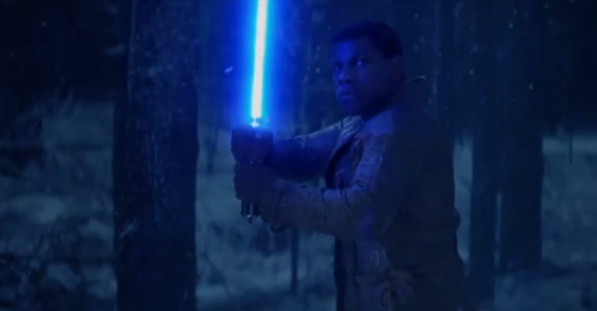 New 15-second footage from “Star Wars: The Force Awakens” is here and it shows a lot of exciting possible plots that can happen in the highly-anticipated film.

The teaser debuted in Instagram with the caption, “There has been an awakening… #StarWars #TheForceAwakens,” with the first few shots showing General Hux standing on a platform, seemingly addressing the First Order. Daisy Ridley’s role as Rey followed with her character looking at the sky with a concerned expression. The most interesting part is Finn, portrayed by John Boyega, as he wields Luke Skywalker’s iconic blue lightsaber ready to fight the antagonist Kylo Ren in the snowy forest.

Talking to Empire, director J.J. Abrams answered some questions of fans as to why the Knight of Ren has a ragged-looking tri-bladed lightsaber and why he does not have the title, “Darth.”

“Kylo Ren is not a Sith. He works under Supreme Leader Snoke, who is a powerful figure on the Dark Side of the Force,” he answered.

He also teased the origin of the First Order and revealed that they may not be the remnant of the imperial army and can be something different, “That all came out of conversations about what would have happened if the Nazis all went to Argentina but then started working together again? What could be born of that? Could The First Order exist as a group that actually admired The Empire? Could the work of The Empire be seen as unfulfilled? And could Vader be a martyr? Could there be a need to see through what didn’t get done?”

Polygon notes that with Abrams’ statement, there seems to be a change in the culture of the Empire after the rebels have succeeded on their missions.