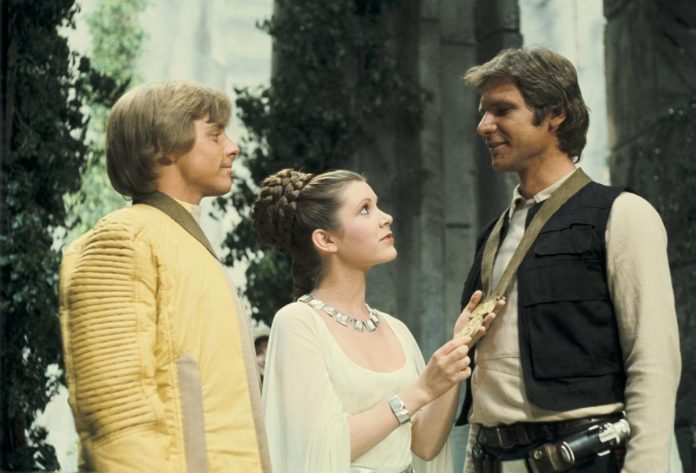 The much awaited panel at Hall H during San Diego Comic Con did not disappoint as the iconic Star Wars franchise saw the reunion of Han Solo, Princess Leia and Luke Skywalker on stage after three decades.

Carrie Fisher and Mark Hamill who played the siblings Leia and Luke in the original trilogy got back together during Star Wars celebration earlier this year. But when Harrison Ford joined them on the panel last Friday, it seemingly brought a lot of nostalgia to the fans.

The Verge reports that it was Ford’s first public appearance since sustaining injuries in his recent plane crash. The actor who came in late jokingly said, “I’m fine! I walked here!”

The trio spent time reminiscing their old roles and lines with Hamill saying, “I really just didn’t want to go to Tosche Station to pick up any power converters.” Fisher also mentioned that the set of the upcoming film “Star Wars VII: The Force Awakens” felt like a flashback for her.

According to Slate, what came in as a surprise for the audience was that Ford became teary-eyed as he talked about the role that made him famous.

“It should have felt ridiculous! Here I was, doing something I did so long ago. I will tell you that it felt great. I was proud and grateful to once again be involved. I never thought it would come back to bless me rather than haunt me. The original Star Wars that I was a part of really was the beginning of my working life.”

The report mentioned that Ford previously said that Han Solo is “a much less interesting character than Indiana Jones” and there were some reports claiming that he argued with director J.J. Abrams while filming and even lobbied to kill his character.

But it seems like the actor came around, “I was very gratified when I read the script, because I read something that I thought was really remarkable. Well written, with some intriguing developments. So I was delighted to be involved,” Ford said.