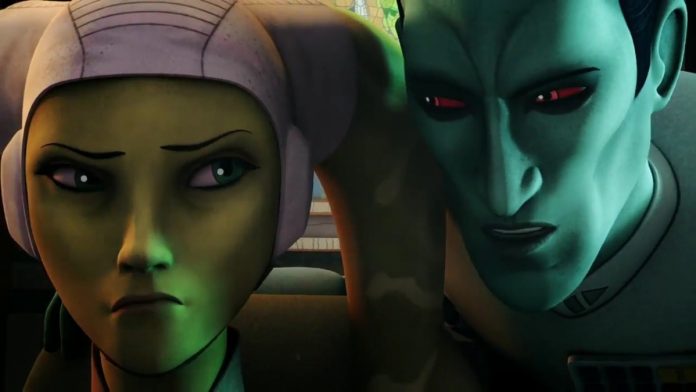 Thrawn has always been an analytical and devious villain during his appearances in Timothy Zahn’s “Heir to the Empire” trilogy, and the new trailer shows that the TV version of the character will be the same as well.

Based on the trailer, it appears that Thrawn is going to use Hera as bait so the rest of the Ghost crew will come to him. An article on Dork Side of the Force says that the crew views Hera as a big sister so they will definitely do all they can to free her. And as a result of their actions, they will fall into Thrawn’s trap.

The trailer also shows Darth Maul having the same glowing green eyes that Kanan Jarrus has near the end of the full-length trailer released last July. According to Screen Rant, something may have possessed them both, and there is also a scene where Kanan fights his own ally, Ezra Bridger. Meanwhile, an article on Comic Book points out that there may be a correlation between the green glow and the Force-magic of the Nightsisters from “Star Wars: The Clone Wars.”

Speaking of “The Clone Wars,” Bo-Katan Kryze is going to appear in “Star Wars Rebels” this season and Katee Sackhoff is coming back to voice her. Bo-Katan is a Mandalorian warrior who used to be part of Maul’s Shadow Collective; however, she ended up siding with Obi-Wan Kenobi and escaped from Mandalore. The character first appeared in “The Clone Wars” TV series.