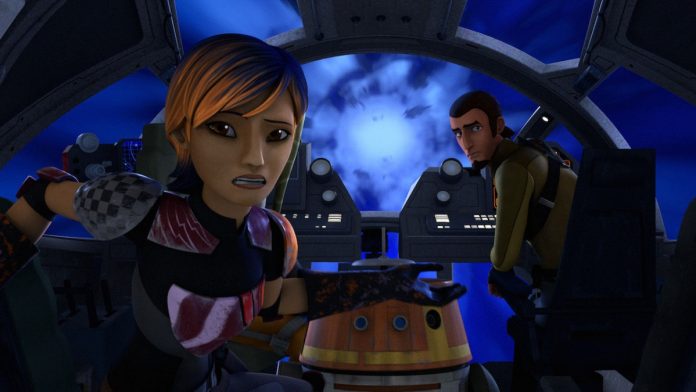 Since last weekend’s Star Wars Celebrations Europe, fans have been ravaging every single morsel of information revealed with regard to the third season of “Star Wars Rebels.” Aside from some cool character reveals seen in the trailer, a lot of other stuff can be picked up including the noticeably more prominent role of Sabine.

The Ghost crew member is already an interesting subject given her lineage being one of the highly intriguing Mandalorians. For a time, “Star Wars” fans dug the Mandalore myth via the intricate bounty hunter armor of Boba Fett. And with the introduction of Sabine, thirst for anything about the group increased.

Coming into season 3, Sabine’s role will be significantly levelled up. Even the change in her appearance, as well as her brand-new gadgets, are suggesting that she is stepping up to the plate in being one of the most influential persons in the Rebel community at that time period.

“I feel like, with what’s happening in our world now, stakes are higher for everyone: Kanan can’t see, Ezra has this internal battle between the dark side and the light side [of the Force], and the Ahsoka and Vader fight, obviously [affected everyone],” Tiya Sircar, voice actress for Sabine, explained to Comicbook.com.

“Sabine is having to be pressed into this leadership position, which I think she is happy to assume, but it’s a lot of pressure she hasn’t yet experienced. Then there’s that backstory that comes into play. It’s been exciting, but she’s got a lot more going on, so there’s a lot more responsibility to treat it with care,” Sircar added.

With Sabine climbing the ladder on the light side, the dark side has its own version Darth Maul albeit a little bit different in dynamics, given that he works alone. The Sith Lord’s sudden resurgence back in season 2 has made so much impact and it appears that he gets stronger and stronger. This newfound motivation comes from his belief that the universe owes him big time, says Sam Witwer, who voices the character.

“He’s constantly striving for what he feels the universe owes him and what he thinks he can achieve. That man is extraordinarily talented. He’s brilliantly intelligent,” Witwer told Comics Alliance. “There’s no reason he shouldn’t have succeeded, but he hasn’t. That doesn’t sit well with him.

'Game of Thrones' season 6 spoilers: Arya still in trouble in...