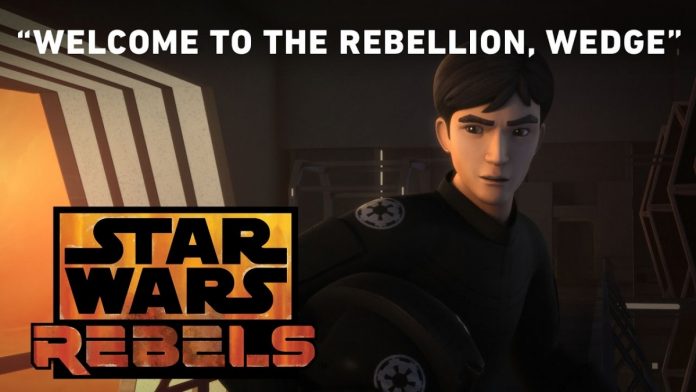 Two episodes in for this season and with both big baddies, Grand Admiral Thrawn and Darth Maul, getting their stories on the wheelhouse, “Star Wars Rebels” settles a bit with this week’s episode focusing on a covert mission for Sabine.

While the chapter seems a bit more relaxed following the last two weeks since this year’s outing debuted, the narrative is still as compelling as ever; more so with the return of a familiar face in Wedge Antilles.

Aptly titled “The Antilles Extraction,” the episode sees Sabine going undercover in the Academy to sneak out the young pilot working for the Empire. As it turns out, the character who would become one of the Rebellion’s most skilled flyers helping the Alliance eventually defeat Darth Vader and company in the original trilogy was initially a part of the dictatorship until he felt the need to escape.

As revealed in the promo clip for the upcoming installment, Wedge supposedly sent a distress call to the Alliance asking for help. Given that Wedge is one of the most prominent side characters in the movies who actually saw the destruction of both Death Stars, his introduction to the animated series is definitely worth looking forward to.

However, fans who are being extremely observant of the “Star Wars” lore as a whole point out that in one of the novels, titled “Aftermath,” Wedge’s first mission came from Fulcrum who was revealed to be Ahsoka by the end of “Rebels” season 1. While it poses a conflict in the narrative, folks over at Jedi Council share that there will be some sort of explanation on how things came to be. Meaning, there is more to the episode than just Sabine sneaking Wedge out of the Empire’s clutches.

Moving forward in the season, “Rebels” creator Dave Filoni spilled that aside from padawan Ezra, they are also staging a huge Sabine arc which only makes sense as both have been teased to be stepping up to the leadership plate.

“We’re getting into a lot more detail about Sabine and her backstory and what her actual potential is. I think that she’s kind of risen to become a character that to the series is every bit of a lead as Ezra,” Filoni revealed to Empire magazine on what fans can expect from the artsy Ghost crew member. “She’s going to have quite a journey this season that gets into why she is a rebel and what her business was in the Imperial Academy when she was a teenager.”