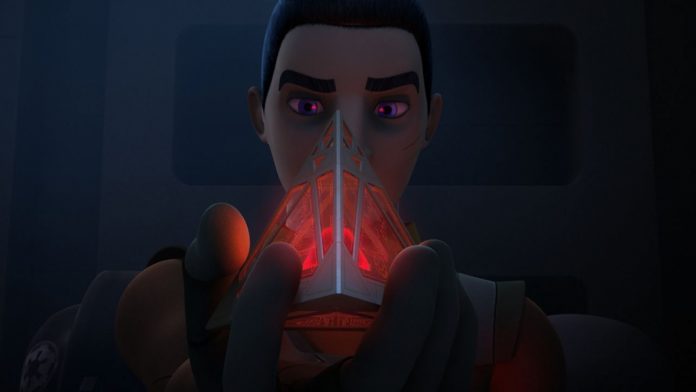 The dark side is definitely brewing inside of Ezra in the latest “Star Wars Rebels” clip that rolled out a couple of days before the season 3 premiere.

Ezra has progressed quite quickly in learning the ways of the Force, as pointed out by Kanan previously. Given his abilities, he may be at a place where he is more susceptible treading the dark side than keeping the light inside of him. What is more dangerous is once the animated show returns in Disney XD, the padawan will be taking on a bigger role in the Ghost crew. Given his master’s new predicament, he will be stepping up to the plate alongside Sabine. And with his worsening thoughts, it is possible that his impulsive actions could jeopardize the Rebel Alliance’s secret operations.

Hints that Ezra might eventually mimic Anakin Skywalker’s journey were peppered all throughout the previous season. The Lothal native carried lack of patience and a Zen mentality that Jedis imbibe. Like Darth Vader, Ezra’s inclination to the dark side is also rooted from a good place. In the clip, he sulks from not being able to push through with a mission which presumably has gone awry. An unknown voice coming from the Sith holocron, on the other hand, indulges his thoughts which make him relate to the Sith ways with his desire for power.

Piecing the new trailer with a previously released teaser, Ezra and Hera appear to be on a covert mission in one of the Imperial bases. Unfortunately, even before they are able to accomplish what they need to do, they run into Grand Admiral Thrawn who summoned Hera for further questioning. It can be remembered that in a separate Thrawn-centric teaser, the interrogation is shown to be done by the Chiss himself.

A day before the show debuts, reviews are pouring in from press people who were lucky enough to be able to sample “Rebels” season 3 beforehand. And it seems like the prequel show will waste no time in diving into the story with the introduction of Thrawn and Ezra’s continued seduction to the Sith program. A non-spoiler conversation posted by Collider even hinted that the young padawan may have done something that will ultimately toss him to the dark side without any way of coming back. It also claims that a darker and grittier tone will be featured in the new arc.

Meanwhile, the synopsis for the back-to-back season 3 premiere titled “Steps into Shadow” reads:

“As Kanan deals with the aftermath of his encounter with Maul, Ezra is tasked with leading rebel missions seeking ships, supplies and new recruits eager to join the cause. With the pursuing forces of the Empire now under the direction of the cunning Grand Admiral Thrawn, the rebels must take greater risks, forge unlikely alliances and face foes from past in their efforts to support the growing rebellion.”