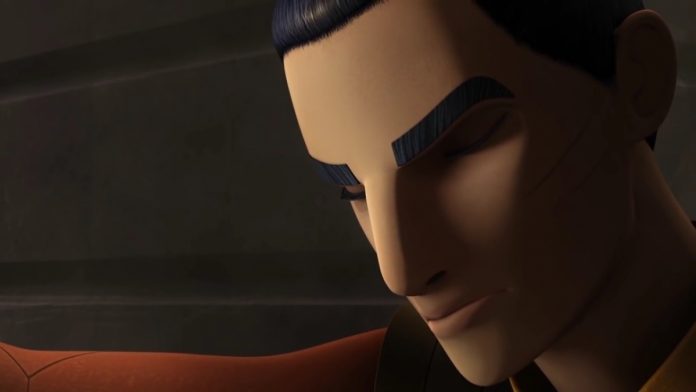 Last season ended on a high note with Darth Vader fighting his former apprentice Ahsoka Tano, and more importantly, Ezra opening a Sith holocron. Was that a sign of dark times ahead for the Ghost Crew?

The crew may be facing a calculating opponent in Grand Admiral Thrawn; however, Ezra is as strong as ever with the Force. Lucasfilm and Disney XD recently released a new clip of the upcoming season and it features Ezra using the Jedi mind trick on an AT-CT pilot.

Did Ezra embrace the dark side between the season 2 finale and the upcoming season? Sources believe that Ezra will face a difficult decision in “Star Wars Rebels” season 3 as he struggles between the light and dark side of the Force.

Fans of “Star Wars” might notice that the Jedi mind trick Ezra used is beyond anything seen before from past Jedi knights. He took control of the pilot and used him to shoot the other Stormtroopers. Ezra’s friends, Zeb and Hondo, were also shocked by this use of the Force. As Dork Side of the Force pointed out, that isn’t something a Jedi would do.

This shows that Ezra is indeed tapping into the knowledge he learned from the Sith holocron to increase his power in order to defeat the Empire.

According to ComicBook.com, the upcoming season will show viewers that a middle ground for Force-users does exist, and it is not as black and white as people thought. While the Jedi and Sith have battled for a long time, there are also those who lean neither to the light nor the dark side. Perhaps Ezra may become one of the first Grey Jedi in the “Star Wars” canon as he manages to balance both sides of the Force.

Fans won’t have to wait long to see how Ezra has evolved as “Star Wars Rebels” season 3 is set to premiere on Saturday, Sept. 24 at 8:30 p.m. EDT on Disney XD.