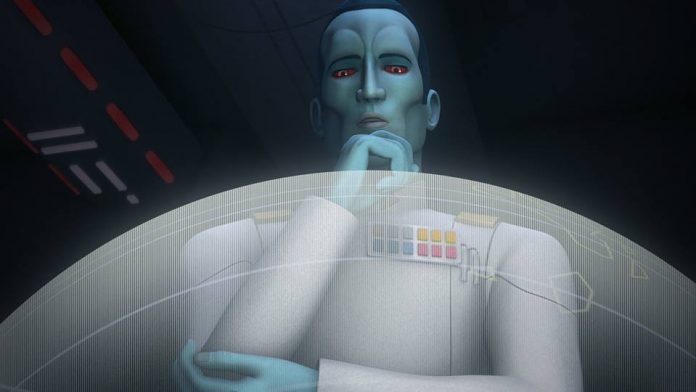 Coming into season 3, “Star Wars Rebels” seems to have quickly become crowded on the dark side with Darth Vader, Darth Maul and the recent inclusion of Grand Admiral Thrawn in the picture. In hindsight, during that time period, the Empire had been at their peak and it is quite unnerving to see all of these antagonists trying to chase down one cell in an interconnected web of Rebel units. But as the season slowly draws near, it becomes clearer that the Ghost Crew will only have to zero in on Maul and Thrawn as Vader will only be peppered throughout the chapter.

Voice actor Freddie Prinze Jr. who works the newly blinded Kanan shared that their third iteration will be more focused on battling the scar-faced Sith and the tactical genius Chiss. Talking to Dash Star, the 40-year-old said that the chess match between the freedom fighters will be more sophisticated in a way that everybody is upping their game. Both icons of evil, Maul and Thrawn, have vastly different backgrounds, tactics and approaches which will have the team getting rattled from two directions. While the warfare veteran takes care of the bigger fight in trying to pin down the Alliance, the double-blade lightsaber wielding warrior will chip the crew from the inside by trying to take Ezra under his wings from Kanan.

However, despite Vader not being too much involved, it does not mean that the show will stray away from the nitty gritty. In fact, their much later time slot suggests that as the animated series will continue to tackle more serious matters as they will also start delving more into the philosophical sense of the Force. This is where the character of Bendu comes in, whose neutralism is the perfect tangible icon for the hope in the restoration of balance in the universe.

Creator Dave Filoni has previously touched upon this subject, revealing that they are not shying away from a darker tone just because they are still technically as Disney show. In fact, shades of where the story will go have already been teased by the end of season 2, with Ezra’s seemingly imminent path to the dark side and Ahsoka’s unknown whereabouts.

As to where Vader may be during “Rebels” season 3, Prinze Jr. hinted that there are some other issues that he needs to attend to. This eventually might be the supposed link between “Star Wars'” upcoming anthology film “Rogue One” and the animated show. Premise-wise, the two narratives are almost happening concurrently depending on the future of “Rebels” and the scope of time lapse “Rogue One” incorporates. Fans already know that the formerly known Anakin Skywalker will have his big screen return on Dec. 16, with the movie’s latest teaser giving it away. A more indirect tie-in had been earlier confirmed with the involvement of Forest Whitaker’s Saw Gerrera in the Gareth Edwards flick.

'Frozen 2' news: Sequel finally gets the green light from Disney;...