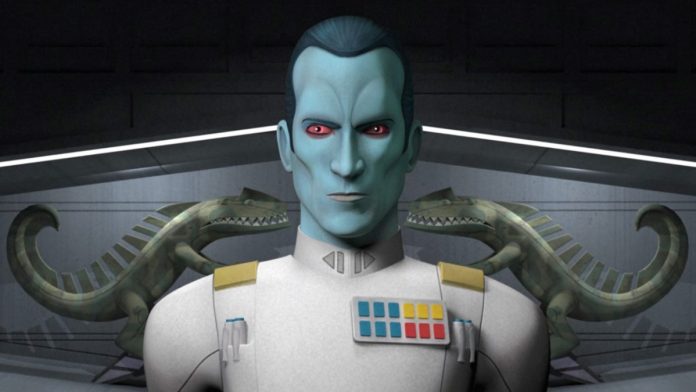 It is not much of a secret what will happen after the events in “Star Wars Rebels.” Needless to say, just because it is squeezed in-between the two “Star Wars” trilogies do not mean that the show is less than thrilling. In fact, creator Dave Filoni and his team were able to make use of their premise as a way of perfectly melding something new and something familiar. Furthermore, it is also a good platform for yet to be introduced characters and those who have strayed from the motion pictures but are very much part of the whole lore.

A couple of months before the big reveal in this year’s Star Wars Celebration Europe, there were already rumors about Grand Admiral Thrawn jumping to the canon from the Extended Universe via the show’s third season. But aside from a couple of glimpses that fans were treated to in the trailers and the fact he is voiced by Lars Mikkelsen, not much is known as to his ties to the Empire.

Originally from the famed “Thrawn Trilogy” novels by Timothy Zahn, it was not until the fall of the Empire following the Battle of Endor in “Star Wars: Episode VI Return of the Jedi” that the Chiss tactician brought to the forefront. Being born around the time of the Clone Wars, he had been lurking on the sidelines for quite some time as he worked his way up the chain of command until the Emperor took him in. He tried to rebuild the Galactic Empire after Palpatine and Vader’s deaths but was eventually killed in a subdued manner by his bodyguard. All throughout his life, he had multiple run-ins with the Skywalkers and at one point he even kidnapped Leia while she was pregnant.

What is interesting is Lucasfilm and Filoni have yet to disclose which bits and pieces from Thrawn’s origin story will be carried out moving forward. Although it appears that he is every bit the warfare genius that he is supposed to be, talking about studying art and his nemesis, it will arguably be a fresh take on the character.

So far, the promos show that Grand Moff Tarkin and Governor Pryce will bring him in to take on the Ghost crew who has been a headache for the Empire for quite some time now. And with the reveal that Vader will be less involved in chasing Kanan, Ezra and the rest of the crew, it is safe to say that the blue-skinned alien will be the one taking over the role of destroying them.

In one interesting snapshot in the belatedly released trailer centering on Thrawn, it seems that he is in for a tense meeting with Hera. Unfortunately, the events prior to that hostile conversation have yet to be disclosed.

To catch more on the budding chess match between Thrawn and the Rebels, tune in to “Star Wars Rebels” season 3 which is set to premiere on Sept. 24, 9:30 p.m. ET on Disney XD.

'Rise of the Tomb Raider' DLC update: details confirmed for ...