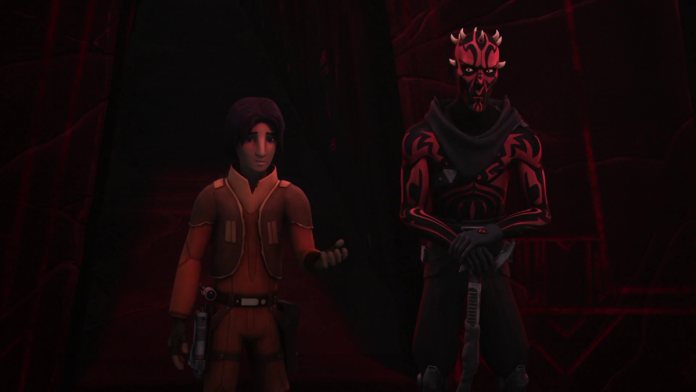 The “Star Wars Rebels” season 2 finale was full of interesting tidbits that may come into play in the animated show’s next chapter including Ezra’s supposed road to be a Jedi.

As previously reported, all three main leads were left with uncertain futures. Ahsoka went out of the radar after finding out that the Sith Lord Darth Vader is her former Jedi Master, Anakin Skywalker. Kanan was crippled by the loss of his eyesight from dueling Darth Maul, and Ezra continued to be tempted by the Dark Side. Given these scenarios, there are a lot of possibilities that show creator Dave Filoni can work with in “Star Wars Rebels” season 3.

One of the more interesting story arcs that fans can expect is that of Ezra’s growing chance in spiraling to the Dark Side. The young padawan had moments of indecisiveness that were hyped by Darth Maul during the season ender.

“We had to explore Ezra’s dark side, and one of the hardest things about that was making it believable that Maul could coerce [him]. I mean, you’re not exactly dealing with a character that doesn’t look exactly like the devil in Maul,” Filoni shared.

Coming from a family of Rebellion fighters, the Lothal native was exposed to a lot of conflicts growing up. In that kind of environment, the sense of discussion and peacefully resolving an issue is almost non-existent. Instead, chaotic clashes were prevalent making him more primed for the Sith than the Jedi way. It does not also help that Darth Maul is selling the idea of crossing fences in a convincing way.

“That’s kind of the lure of the Dark Side. A lot of what he’s saying about use your abilities, use your strength, use your anger and you can overpower these enemies,” Filoni continued.

The ever expanding realm of “Star Wars” is no stranger to good guys attracted to being bad. A glowing example is the story of Anakin Skywalker transitioning into Darth Vader. Another one is that of the Grand Inquisitor who turns out to be a former Jedi Temple Knight.

Shall Ezra’s future lie on practicing his Force Ability as a Sith instead of a Jedi, it is interesting how his master, Kanan, will react to it. Fans of the show know that the Jedi Knight was original apprehensive of taking a trainee given his insecurities on his own abilities to set a straight path for the Jedi trainee.

Find out if Ezra leaves the light for the dark when “Star Wars Rebels” season 3 debuts on Disney Channel later this year.