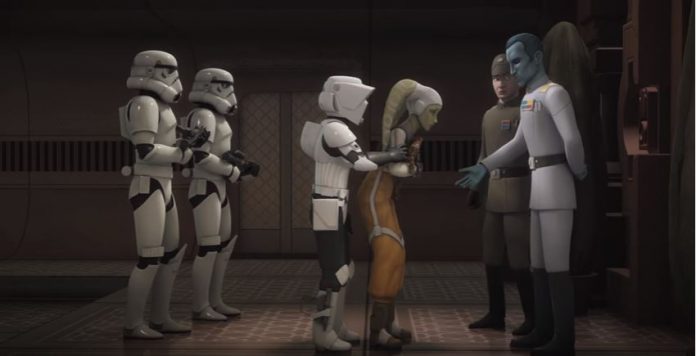 “Star Wars Rebels” is returning for its third season this weekend, and ahead of the premiere, the Disney XD animated series released a new promo clip which sees how the season 3 villain, Grand Admiral Thrawn, can look into the hearts and minds of the rebels.

The clip shows the captain of the Ghost crew, Hera Syndulla running into the blue-skinned Imperial officer after she is mistaken for a servant. According to Entertainment Weekly, the scene is said to be from an upcoming episode called “Hera’s Heroes” in which she and the Ghost crew run a rebel supply mission to her homeworld, Ryloth. During the mission, she decides to recover an artifact that is important to her people.

The video starts with a droid rolling towards a pair of Stormtroopers, and while the droid diverts their attention, Hera and Ezra run to a pillar to hide from them. Hera is seen clutching the artifact, while Ezra is disguised as a Scout Trooper. Ezra tells her to go first, and Hera walks out and heads for the exit. But as she turns around, she finds herself face-to-face with Thrawn and one of his deputies.

The deputy tells Hera to get out of the way and head back to the kitchen, and Hera turns around and starts to walk away. But Thrawn stops her and calls for a guard to bring her back. Ezra puts his mask on and goes to Hera, and he pushes her towards the Grand Admiral. Thrawn asks to see what she’s holding, and Hera reluctantly hands it over.

“I’m a visitor to your world. It occurs to me, it might be beneficial to hear what you have to say about our Imperial occupation,” Thrawn drawls.

“I don’t think I could be of any help to you,” Hera answers.

“Oh, I disagree,” says Thrawn, before telling the deputy to bring Hera to his office for questioning.

Thrawn was the main villain in Timothy Zahn’s trilogy of “Star Wars” novels in the 1990s. Season 3 sees the debut of Thrawn, and he appears to be a force to be reckoned with as he is a skilled tactician who understands how the rebels think and feel.

'Castle' season 8 spoilers: Espo's past relationship to be center of...