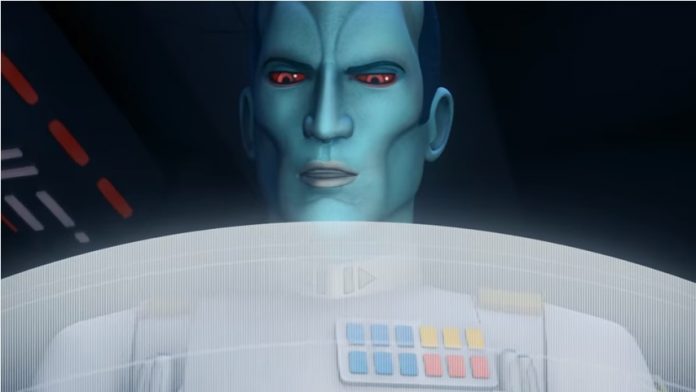 Disney XD’s 3D animated series, “Star Wars Rebels” is now heading toward its third season and it will showcase a new nemesis that will give the rebellion a hard time crushing the Empire.

The upcoming season was announced by the network’s senior vice president for programming Marc Buhaj who at the same time commended the production crew that made the show’s third installment a possibility.

As per the newly released trailer, one of the Empire’s feared war tacticians, Grand Admiral Mitth’raw’nuruodo known by most “Star Wars” fans as Thrawn, will be joining the mayhem next season.

For the uninitiated, Thrawn has been regarded as one of the best in the roster of the Empire’s officers due to his impeccable battle plans and he is the only naval officer that is alien in origin.

Reports suggest that next season will showcase a story plot where the rebel forces will be tasked to deliver their most ambitious mission yet as they will be pushing through in launching a massive strike against the Empire.

It is also said that the rebellion headed by the collective known as the Ghost crew and the Lothal rebels also known as Spectres have put up an undisclosed headquarters on the remote planet of Atollon. Furthermore, the show’s protagonist, Ezra Bridger, is busy reinforcing the rebel forces by enlisting troops and gathering the much-needed firepower that will help them with their cause.

The Empire, on the other hand, does likewise and calls on one of the Empire’s best strategists, the aforementioned Thrawn. Meanwhile, Ezra, together with the Mandalorian Sabine Wren, will be assuming new responsibilities in the forthcoming season as they will attempt to put an end to the Empire’s reign.

The season premiere of “Star Wars Rebels” will air this Sept. 24 with the episode dubbed “Steps Into Shadow.”