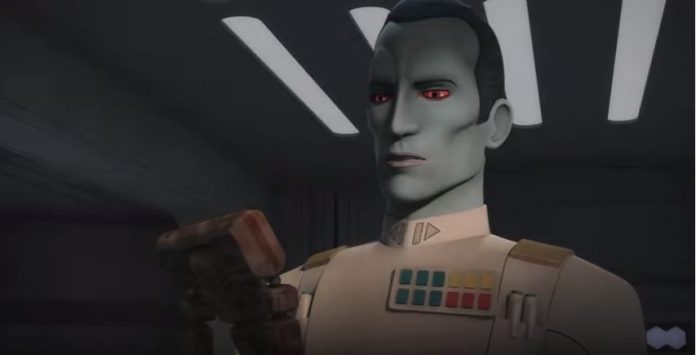 The third season of “Star Wars Rebels” is slated to begin later this year, and at the recently held Star Wars Celebration in London, England, executive producer Dave Filoni previewed the return of a famous “Star Wars” villain in the new official trailer for the Disney XD animated hit.

According to Entertainment Weekly, the season 3 trailer of “Rebels” unveiled at the event featured Grand Admiral Thrawn. The character was created by author Timothy Zahn and has been one of the villains in the Star Wars Expanded Universe that fans have always wanted to see in one of the franchise’s projects.

Thrawn was the main villain in a trilogy of books published in the early 1990’s that picked up the story of Han Solo, Luke, and Princess Leia after the events of “Return of the Jedi.” In the books, the character is depicted as a blue skinned, red-eyed Imperial officer, who gathers what remains of the Empire after the deaths of Darth Vader and the Emperor.

At the event, Filoni said, “You couldn’t have grown up a ‘Star Wars’ fan without encountering Thrawn in ‘Heir to the Empire.’ It was a dark time when there weren’t any more movies, and it blew our minds that there could be more.”

In the trailer, Governor Pryce is asked what to do about the Rebels, who have proven to be particularly stubborn. The Governor says that she needs someone who sees “a bigger picture,” and she brings in one of the few non-human Imperial officers to do that.

It appears that the Rebels will have a hard time defeating the Empire in season 3 as Thrawn appears to know their every move and has a counter-attack ready for each of their strategies.

“To defeat an enemy, you must know them,” Thrawn says in a voiceover as the character emerges from the shadows. “Not simply their battle tactics, but their history, philosophy…art.”

The character is voiced by Lars Mikkelsen, the Russian president on Netflix’s “House of Cards.” Being in the “Star Wars” universe appears to be a theme in the Mikkelsen family, as Lars’ brother, “Hannibal” star Mads Mikkelsen, is starring in the upcoming “Rogue One: A Star Wars Story” film as the father of Jyn Erso (Felicity Jones), Galen Erso.