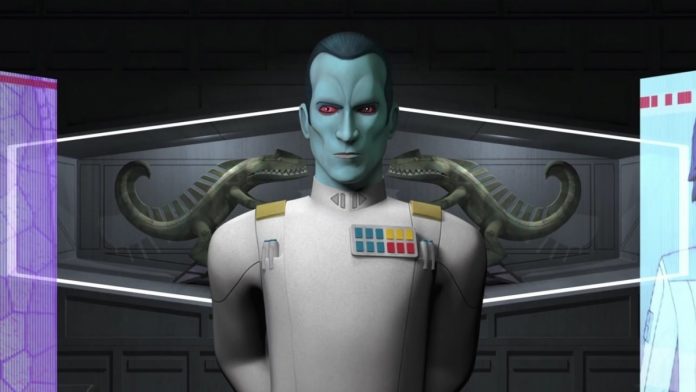 As the premiere of “Star Wars Rebels” season 3 draws near, Disney and Lucasfilm decided to give fans one more look at the enemy that Ezra and the Ghost Crew is going to be facing this season.

The trailer shows that the Rebels are going to be in a lot of trouble as they face a cold and calculating nemesis in Grand Admiral Thrawn this season. Long time fans know that the blue-skinned Imperial military commander is not new to the “Star Wars” franchise. Thrawn first appeared in Timothy Zahn’s “Heir to the Empire” back in 1991, and he has appeared in several other “Star Wars” books and games since.

Like the rest of the Expanded Universe line, Thrawn was declared non-canon when Disney bought Lucasfilms, so despite being an old character, he would be making his first canon appearance in “Star Wars Rebels” season 3.

Just like his counterpart in the books, the animated version of Thrawn is also a calm and collected strategist, and he will take advantages of any cracks shown in the Rebel Alliances. Despite the absence of Darth Vader this season, the show will go on without a hitch thanks to Thrawn.

Meanwhile, reports are saying that Ezra will find himself slowly edging closer to the Dark Side of the Force this season. Viewers will also see Wedge Antilles join the Rebel Alliance.

Of course, fans of “Star Wars” always knew that Wedge would eventually join the Rebels since he was in “Star Wars: Episode IV – A New Hope” where he piloted an X-Wing. While Maul was originally going to die in season 2, the upcoming season would continue to feature him as he entices Ezra to join the Dark Side.

'Transformers 5' spoilers: Michael Bay as director of fifth movie is...