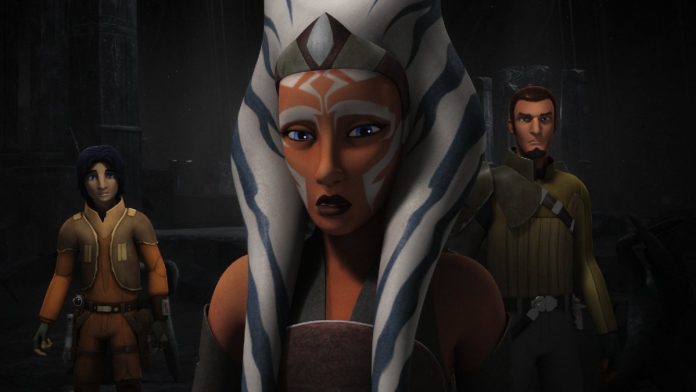 “Star Wars Rebels” season 2 ended with all of the three main characters having uncertain futures, which only lead to so many questions continuing to the third chapter of the show.

Ahsoka vanished after her much awaited square off with her former master, Darth Vader. Given that her story is somehow unknown at this point, fans are wondering if they will still be able to see her character moving forward to season 3.

“I would just say that there are probably–and I’ll give you this as we go back a ways–there are probably more stories to tell with Ahsoka Tano but I would not believe that that would happen necessarily on ‘Star Wars Rebels,'” show executive Dave Filoni revealed.

While the duel between former master and trainee came to terms, another big plot point of the finale involved the come back of Darth Maul, who seemingly played the same card that Emperor Palpatine used against Obi Wan Kenobi to ultimately turn Anakin Skywalker to the dark side. For quite a bit, the Sith Lord worked together with the three leads in battling Inquisitors until he decided to betray them and blind Kanan revealing his true intentions of taking Ezra away and making him his apprentice instead.

Fortunately, Kanan was able to thwart Maul for the time being but would have to continue his adventures without his eyesight. Filoni revealed that his disability will be a pivotal point on how the Rebel leader will develop for the overall story of “Star Wars Rebels.”

“You have a character in Kanan that was really hiding from who he was for a long time, and now has come out of that and kind of reclaimed who he was, or who in a way he was meant to be as a Jedi teaching the students,” the animation director revealed in a separate sit down with IGN.

“But that doesn’t mean that that choice comes without a cost. Again, we’re going to face challenges in life, and now Kanan is going to face this big challenge and what it means for him as a crew of the Ghost that he’s suffered this injury, and can he overcome it. It definitely plays out next season,” he continued.

Another exciting incident in the sequence between Darth Maul and Kanan is the latter picking up a helmet of a fallen Jedi temple guard and putting it on. Speculation has it that it is a nod to what else is to come in the series. In an interview with Freddie Prinze Jr. who voices the character Kanan in the animated show, he adamantly said that “nothing happens on accident on ‘Star Wars’ world” while discussing the two-part season finale, hyping fans on what could possibly be the link between Kanan and the ancient head piece.

There is no official date yet on when “Star Wars Rebels” season 3 will be back on air, but fans can expect it in the latter half of the year.