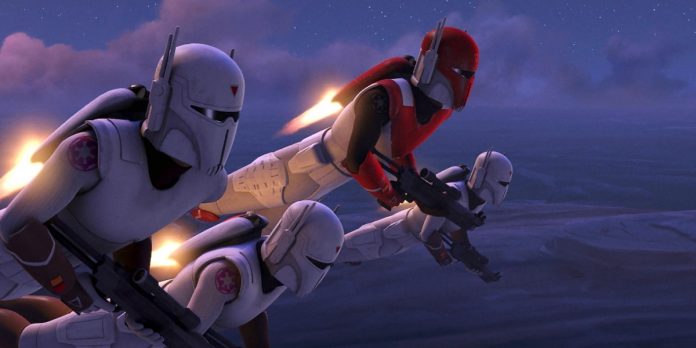 Treading along the lines of what last week’s episode started, the upcoming offering of “Star Wars Rebels” once again taps into the prequel with the exploration of the Mandalorians.

Obviously, this puts the Ghost crew’s very own Mandalorian, Sabine, at the forefront of the action as she battles her own people who are now serving the Empire. The episode titled “Imperial Supercommandos” also brings Ezra and Chopper into the thick of things as well as the return of Fenn Rau from last season.

In the promo clip for the installment, Sabine, together with Ezra and Chopper are surrounded by Imperial Mandalorians who are trying to convince her to come join them. In the hopes of poking a soft spot for the artsy rebel fighter, renegade assassin Gar Saxon even brings up Sabine’s mother which surprises Ezra.

Wise beyond her years, Sabine stands her ground and does not let herself be swayed even though Saxon continues to taunt her with tales of her mother being disappointed in her since she left the Imperial Academy. The exchange is also tipped to shed light on why the Mandalorians have joined forces with the Empire given their pretty abusive treatment of the rest of the galaxy. Aesthetically, jetpacks will also be featured as part of the highly impressive Mandalorian armor.

It is no secret that this season, “Rebels” is really fleshing out their characters especially with Sabine taking on some kind of leadership role in the show’s narrative. With just seven episodes into the year, she already has a couple of solo adventures under her belt including sneaking out Wedge Antilles from the flight academy back in episode 4.

It is important to note that “Star Wars Rebels” season 3 is taking a week off, thus, no new episode will be aired. The hit prequel animated show will be back with new content next Saturday, 8:30 p.m. ET on Disney XD.