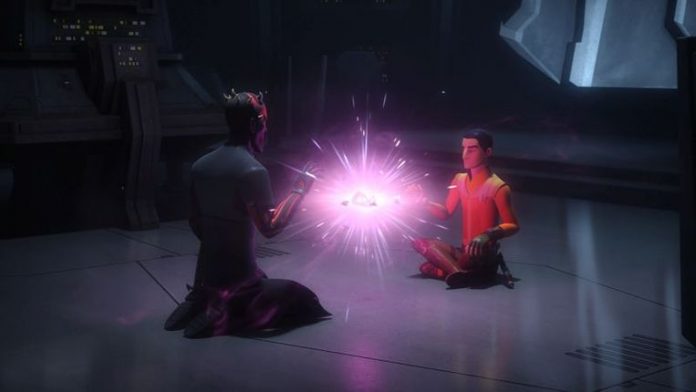 Darth Maul may have been a no-show in the back-to-back premiere of “Star Wars Rebels” season 3, but the reluctant Sith is making his grand entrance in this week’s episode with what seems to be an ambush attack against the Ghost Crew.

A promotional clip for the newest installment of the Disney XD series titled “The Holocrons of Fate” marks the reintroduction of Maul as he sneaks past Hera to retrieve the Sith Holocron they discovered in the season 2 finale. Backed into a corner with Zeb and Sabine also tied up, the Ghost pilot appears to have no choice but to lead Maul to Ezra’s sleeping quarters where Maul got a hold of the “Star Wars” artifact.

However, instead of nabbing the Sith’s version, he ended up with the Jedi one as it can be remembered that Kanan haphazardly handed The Bendu the former iteration in last week’s episode. Interestingly, fans noted that upon seeing the Holocron, Maul was obviously pleased, not knowing that if ever he is able to open it, a message from his arch nemesis Obi-Wan Kenobi will come out instead.

Regrettably, the scar-faced villain is able to find out that what he has in his hands is not the one that he is looking for, prompting Kanan and Ezra to seek out The Bendu to retrieve the Sith Holocron to save their friends.

Piecing the newly released trailer with a video that was released prior to the start of the season, the Jedi Knight and his padawan will eventually be able to strike a deal with Maul when they visit his den. But given the manipulativeness of Darth Sidious’s former right-hand man, it appears that there is a bigger picture involved in the episode that would need both Holocrons and both representatives from the light and dark side of the Force. This sequence presumably ends with Ezra and Maul looking like they are trying to do something with the relics which fans were able to see snippets of in previously released trailers.

The upcoming installment of “Star Wars Rebels” puts Maul in the center of the action while Grand Admiral Thrawn is cast to the sidelines in a reversal of roles coming from the season premiere.

'Once Upon a Time' season 6 premiere spoilers: Captain Nemo to...