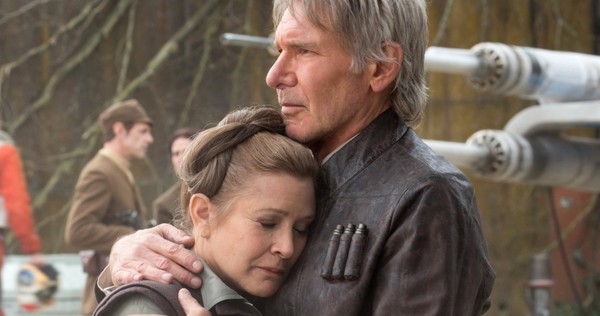 Many theories have stemmed from last year’s “Star Wars: Episode VII The Force Awakens” and some of them could possibly be addressed in the next two movies of the contemporary “Star Wars” trilogy.

Arguably, the J.J. Abrams-directed movie was more of Han Solo’s (Harrison Ford) story than Luke Skywalker’s (Mark Hamill). Snippets of where the latter had been in the last 30 years were suggested as well as how his family life with Leia (Carrie Fisher) turned out. At the peak of the film, the space smuggler remained at the forefront as son Kylo Ren (Adam Driver) ignited his lightsaber which ultimately killed Han. It was an emotional moment for sure as Han seemingly met his end especially after falling off the railless bridge. However, theories of him still being alive and well continue to float around on the internet.

The Nerf herder’s rumored survival comes in a lot of different versions, but one of the most prominent ones says that Kylo skewering his dad with a lightsaber was only an act for him to continue double agent duty.

“People have asked me if I think Kylo Ren is just playing with [Han Solo] this whole time whether he meant to kill him from the beginning. The truth is that I think Kylo Ren in this moment is actually being convinced to walk away from this,” Abrams confessed in a special commentary that is part of “The Force Awakens'” 3D Blu-ray Collector’s Edition (via Comicbook.com). “Snoke [Andy Serkis] is as Han says using him. I think somewhere Ben knows this, but I think that he can’t accept this. Deep down, he has gone too far.”

Taking a step back, Kylo Ren seems to be the most upfront character in the band of characters in the new trilogy. “The Force Awakens” did not dance around his real persona. Even the reveal that he was indeed the son of Han and Leia was not a big spectacle. Instead, the tidbit was nonchalantly thrown in while Kylo was talking to Snoke as if the information was nothing big.

While so many nuggets of details are pointing to Han being dead, including a massive funeral to open “Episode VIII,” a lot of fans are still holding on to the possibility that Ford may reprise his iconic role in future films. That can only come now via flashback scenes and it might explain how Kylo was seduced to the dark side or why Han and Leia decided to part ways. Should Han have prior ties to the mysterious Rey (Daisy Ridley), it might also be possible. It is important to note, however, that the “Star Wars” lore is not known for utilizing flashbacks except maybe for that teased scene in “Rogue One’s” latest trailer. Since he is also not an established Force-sensitive being, Han coming back as a Force ghost is also improbable.