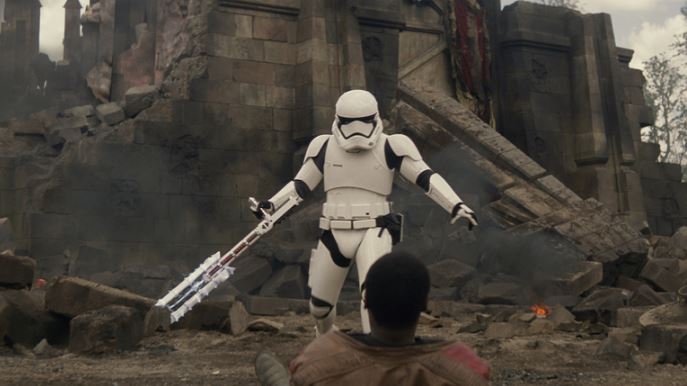 Is Finn (John Boyega) about to duel a formidable enemy in “Star Wars: Episode 8?” A new rumor claims that Finn might be facing off against a Stormtrooper, but this Stormtrooper isn’t just any ordinary soldier as he has been referred to as The Executioner.

According to Making Star Wars, it was claimed that in “Episode 8,” there will be a featured Stormtrooper described as a force to be reckoned with. It is believed that this is The Executioner, and what sets him apart from the other Stormtroopers is a matte black line that goes over half of his mask. He also has a different weapon which features three spinning blades at the end. It was said that Finn will be battling The Executioner, which means that fans can look forward to an epic duel featuring some new weapons.

In “The Force Awakens,” it can be recalled that Finn faced off against Stormtrooper FN-2199, who wielded a Z6 baton. The baton has a magnetic grip and can be spun in combat and delivers a stunning shock. When Finn appeared to be failing, Han Solo (Harrison Ford) saved the day by blasting the Stormtrooper away with his blaster pistol.

Meanwhile, Screenrant speculates that while Finn was overmatched by the Stormtrooper in the previous film, the Resistance hero might be stronger in the upcoming movie due to his bacta therapy. It can be recalled that Finn was gravely injured by Kylo Ren (Adam Driver) towards the end of the last film, and he was placed in a bacta suit to recover from his injuries. In the “Star Wars” universe, bacta is a substance that can repair skin, tissues, nerves, and muscles, and as a result of the treatment, Finn might become stronger and more resilient in the next installment.

Other rumors indicate that “Episode 8” will reveal Rey’s (Daisy Ridley) parents as well as whether she and Kylo are related or not. For now, it’s best to take these “Star Wars” rumors with a grain of salt as it will be more than a year before the film premieres.

'Dragon Ball Xenoverse 2' news: Upcoming title to be playable at...