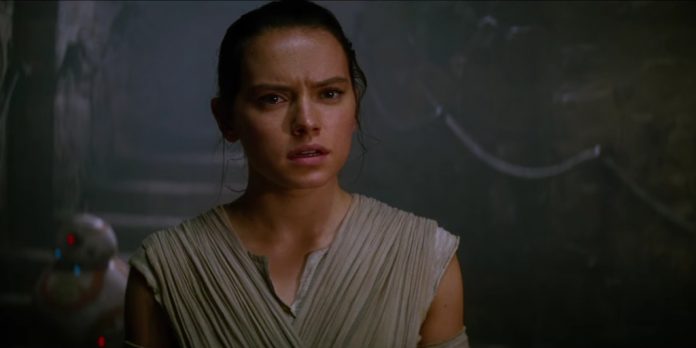 It seems that next year’s “Star Wars: Episode VIII” will finally start answering some of the mysteries posed by its predecessor last year. One of which is the highly debatable lineage of the contemporary trilogy’s new heroine, Rey.

Daisy Ridley, who was thrust into the spotlight after debuting as the scavenger, Force-sensitive character in”Star Wars: Episode VII The Force Awakens,” was asked what she can say about the many theories involving her parents. Obviously, tongue-tied, the young actress tried to be as coy as possible considering all the ways media can squeeze out the tiniest of information that hints at her true persona.

More recently, Vulture caught up with her and asked about her thoughts on the many fan speculations including her supposed connection with Obi-Wan Kenobi (Sir Alec Guinness/Ewan McGregor).

“We will see in a year,” Ridley plainly said, not even entertaining the idea. “Just sit tight on that question.”

While her comment doesn’t appear to be substantial, given that it is the “Star Wars” lore, fans were quick to assume that by “Episode VIII,” which comes out in about a year, the reveal will finally happen. This could be similar to “Star Wars: Episode V The Empire Strikes Back” when Darth Vader (David Prowse, voiced by James Earl Jones) told Luke (Mark Hamill) that he is his father in one of cinema’s most iconic sequences ever.

With comparisons between the two middle films thrown in the past, the interpretation of Ridley’s statement holds ground. Furthermore, it also gives the trilogy more time to twiddle on the upcoming revelation with Colin Trevorrow’s” Star Wars: Episode IX” still on the horizon.

Meanwhile, the episodic films are taking a break this year and in its place will be the first standalone film from the franchise in “Rogue One: A Star Wars Story.” Given that it will introduce another heroine in the form of Jyn Erso (Felicity Jones), Ridley was also asked about the possibility that she is related to her. As per usual, the British actress did not give much away but she sounded a bit more dismissive of the idea compared to the Kenobi rumors.

“I mean, I think historically it wouldn’t work, because she is … Darth Vader is there … so she would ultimately be my great-grandma; no, she would be my grandma. I mean it could happen, especially in a galaxy far, far away,” Ridley pondered.

Taking a step back, Rey’s supposed Kenobi lineage is very plausible given her similarities with the Jedi master. One of which is Ridley retaining her accent which is reminiscent of Ben.

John Boyega, who plays Finn and is also British, had to ditch his accent for the role which means that the way Rey talks could be an Easter egg. Not to mention the voice of Obi-Wan in her Force vision when she touched Luke’s lightsaber in Maz Kanata’s (Lupita Nyong’o mo-cap) dungeon.

Should this be the case, it will open up a new gateway to making that long-rumored Obi-Wan Kenobi spin-off much like the upcoming Han Solo standalone film. Little is known about what Ben exactly did during his voluntary exile in Tatooine until Luke found him in “Star Wars: Episode I A New Hope”.

'Grey's Anatomy' season 13 spoilers: fans give their take on brand-new...