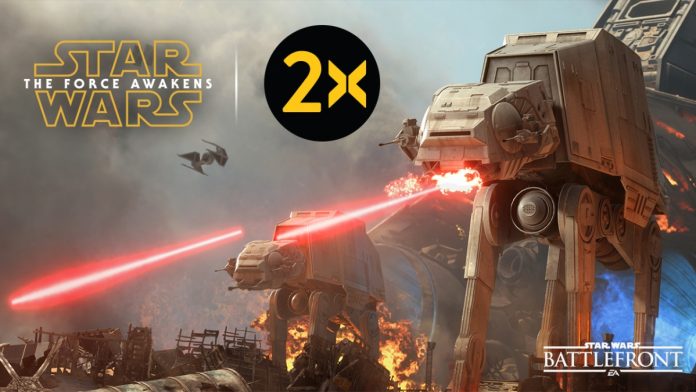 “Get your popcorn ready and controllers charged, because this is a weekend you don’t want to miss,” Electronic Arts said, as they launched the limited event for their hit game “Star Wars Battlefront,” in celebration of the DVD and Blu-ray release of the blockbuster hit “Star Wars: The Force Awakens.”

Now that “The Force Awakens” is finally available for purchase on Blu-ray and DVD as well as digital download, “Star Wars Battlefront” game developer EA Games recently opened up a limited time event for the game that offers double credit points gain boost for the entire weekend. The “Star Wars: The Force Awakens Double Score Weekend” event is live from April 8 at exactly 1:00 AM PT through April 10 at exactly 1:00 AM PT.

The Double Credits weekend event is perfect for players to take advantage of the first paid DLC, which is the “Outer Rim” expansion.

First released as an exclusive DLC for players who availed the “Star Wars Battlefront” DLC Season Pass for a span of two weeks, the “Outer Rim” DLC pack was also recently released for non-Season Pass holders for a standalone price of $15. The first paid expansion of the game adds news game maps, a new game mode, as well as two new characters.

The “Outer Rim” DLC added four new locations to the game: “Jabba’s Place,” “Palace Garage,” the “SoroSuub refinery,” and the “SoroSuub Pipelines.” A new game mode was also added with the update, which was called “Extraction.”

The expansion pack also added two new characters to the game. First off is Greedo, a bounty hunter who is a “fast and reckless gunslinger who darts in and out of combat to keep his confidence high.” Greedo’s specialty is his confidence level, which gets high through time and in turn, increases the damage of his attacks.

The other is Nien Nub, a Sullustian who is a “defensive, calculating hero who provides strategic reinforcements and lethal precision to the Rebel.” While Greedo is focused on his confidence level, Nien Nub is more on his turret.