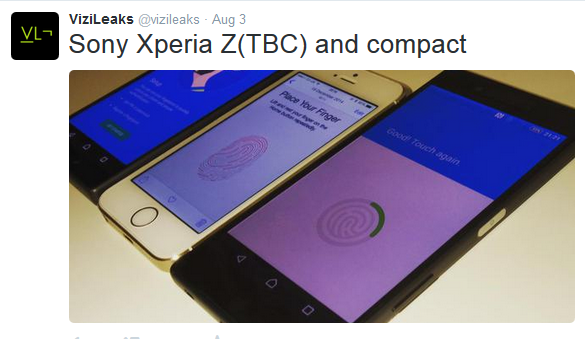 Rumors have been spreading about a new Sony Xperia handset, following the Twitter leak of Vizileaks earlier this week.

Vizileaks, known for posting information about possible upcoming mobile devices, shared a post on their Twitter account called “Sony Xperia Z (TBC) and compact” along with a photo of the rumored phone. It is unclear whether this is referring to a Z5, but that’s how it’s being interpreted around the web, following the trend of the Japanese company’s Z3 and Z4 releases. For consistency, it will also be referred to as Z5 here.

The leak suggests that the handset will come in two different sizes, the regular Z5 and a Z5 compact. One of the anticipated features is a fingerprint reader which appears to be built into the power button at the side of the mobile phone. It is also speculated to have a glass back panel and come without the USB type C port. Other than this, the external features are expected to look almost the same as the phone’s predecessor.

In terms of display, Z5 is speculated to come with a 5.5 inch screen, but it is still unclear whether it will use Quad HD or Full HD display. Some predict that both devices may be powered by Qualcomm Snapdragon 810 v2.1 chipset, while others say it is the more powerful Qualcomm Snapdragon 820. In terms of camera, the device is expected to retain the same 20.7 megapixels rear shooter, along with a IMX230 sensor, while the front shooter also retains the same 8 megapixels selfie camera. For other specifications, it is anticipated to come with a 32GB internal storage, 4GB RAM, and a 4500 mAh battery.

There is no official statement coming from the Japanese company yet. Rumor is that Z5 and Z5 compact will be unveiled on the IFA 2015 Electronics Trade in Berlin, Germany on September 2.