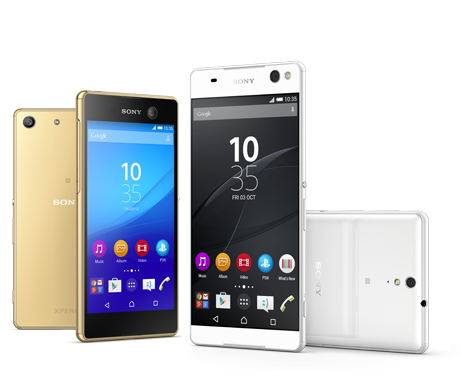 “We are pleased to present two new products that highlight Sony’s advances in camera technology,” said Tony McNulty, Vice-President, Value Category Business Management at Sony Mobile Communications, via Sony’s official press release. “We understand that camera capabilities are important to smartphone users, so we ensured that Sony’s existing camera brilliance was once again surpassed in the new Xperia C5 Ultra and Xperia M5 without compromising on other features across design and performance.”

The Xperia C5 Ultra, boasting of a dual 13 megapixels camera, is dubbed as the PROselfie smartphone. Equipped with Sony’s Exmor RS sensor, the C5 Ultra enhances selfies with the Selfie Flash.

It has a 6″ Full HD display with IPS featuring Sony’s TV technology Mobile BRAVIA Engine 2, featuring a super-thin bezel that gives the C5 Ultra a nearly border-less display. It runs under a 1.7GHz 64-bit octa-core MediaTek (MT6752) processor, with a Mali760 GPU. It comes with 2GB of RAM and 1GB built-in storage, expandable with a microSD card of up to 200GB. It boasts a two-day battery life.

The Xperia M5, meanwhile, is “Sony camera brilliance packed in a premium waterproof design”. It boasts of a 21.5 megapixels rear-facing camera, with 5x Clear Image Zoom feature, and the ability to record videos in stunning 4K resolution. As for the front-facing camera, it also comes with a 13 megapixels front snapper, made especially for selfies and video calling with the capability to shoot videos in Full HD resolution.

Both the Xperia C5 Ultra and the Xperia M5 boot on Android Lollipop 5.0.

Both models also come with their dual-SIM variant, with the same hardware specifications. The Xperia X5 Ulta and Xperia M5 will be released mid-August only in selected countries.