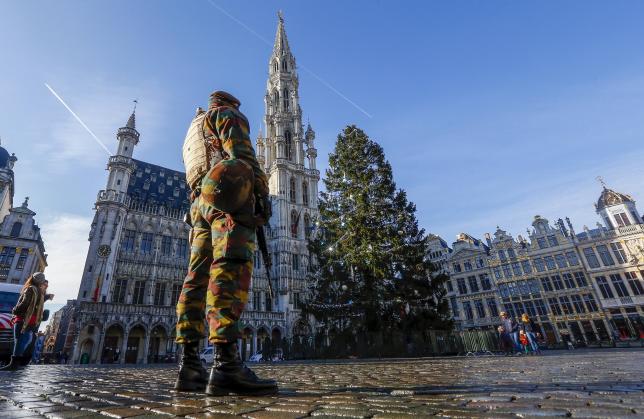 Soldiers patrolled the streets of Brussels and police detained five more people on the third day of a security lockdown on Monday, as Belgium hunted a suspected Islamist militant who has been on the run since the attacks in Paris.

Authorities are still warning of possible imminent attacks like those in the French capital this month, in which 130 people were killed, and hunting Brussels barkeeper Salah Abdeslam, who returned to the city from Paris hours after the Nov. 13 attacks.

Police did not find Abdeslam, whose brother blew himself up in Paris, in 22 raids late on Sunday when 16 people were detained. Five more people were arrested during searches of seven houses in the Brussels and Liege regions early on Monday.

Police have given no details of those held. No weapons were found on Sunday but 26,000 euros in cash, found at a single site, was seized by prosecutors.

The metro, museums, most cinemas and many shops will stay shut on Monday in the usually bustling EU capital where many staff have opted to work from home. There was also no school or university for almost 300,000 students.

On the Grand Place, a historic central square that usually draws crowds of tourists, an armored military vehicle was parked under an illuminated Christmas tree.

NATO, which had raised its alert level since the Paris attacks, said its headquarters in the city were open, but some of its 1,000 staff had been asked to work from home and external visits had been canceled.

EU institutions, which employ some 21,000 people in Brussels, were also open with the soldiers patrolling outside.

Prime Minister Charles Michel said the city of 1.2 million will remain on Belgium’s fourth and highest level of security threat, meaning the threat of an attack was “serious and imminent”.

“What we fear is an attack similar to the one in Paris, with several individuals who could possibly launch several attacks at the same time in multiple locations,” he told a news conference.

Authorities were due to review the situation again on Monday afternoon.

Interior Minister Jan Jambon told RTL radio, however, that Belgium’s capital was still operating. “Apart from the closed metro and schools, life goes on in Brussels, the public sector is open for business today, many companies are open,” Jambon said on Monday morning.

The city’s buses were running normally and many shops in the suburbs were open.

Workers were also setting up stalls for the city center Christmas market, which is due to open on Friday, and local organizers of the Davis Cup tennis final between Belgium and Britain in the city of Ghent, 55 km (35 miles) to the west of the capital, said it would go ahead this weekend.

Germany has kept security along its border with Belgium at a high level since the Paris attacks, a German police spokesman said after media reports that Abdeslam was spotted near the frontier.

Several Belgian media carried unsourced reports saying he had been seen in a car near the eastern city of Liege heading toward Germany. There have been numerous reported sightings in recent days.

However, Belgian prosecutors said on Monday that a BMW car that failed to stop for a routine check near Liege, close to the German border, had been found and inquiries showed there was no link to the Paris attacks investigation.

Shares on the Brussels stock exchange initially dipped, but had recovered by mid-session. The Bel-20 blue-chip index, which includes brewer Anheuser-Busch InBev and chemicals group Solvay, was up 0.1 percent at 1300 GMT (8:00 a.m. ET).

ING economist Philippe Ledent noted the biggest companies’ business was international and therefore the global situation was more important to them. “For smaller companies active mostly in Belgium, they will have business in the rest of the country which is less affected,” he said. “If this is limited in terms of days, in terms of area, it’s not so much of a problem.”

Belgium has been at the heart of investigations into the Paris attacks after French law enforcement bodies said two of the suicide bombers had lived there. Three people have been charged in Belgium with terrorist offences, including two who traveled back with Abdeslam from Brussels.

Among those who decided to go out on Monday was Zineb Toubarhi, a business engineering student in Brussels, who was waiting to catch a bus on a frosty morning.

“I am going to my friends’ place to look after their children today. They must go to work and the schools are closed. I’ve had classes canceled at the university so I will help them,” she said.

“It feels strange to see armed soldiers in the streets but this is for our security. So, I don’t know why, but I am not afraid.”