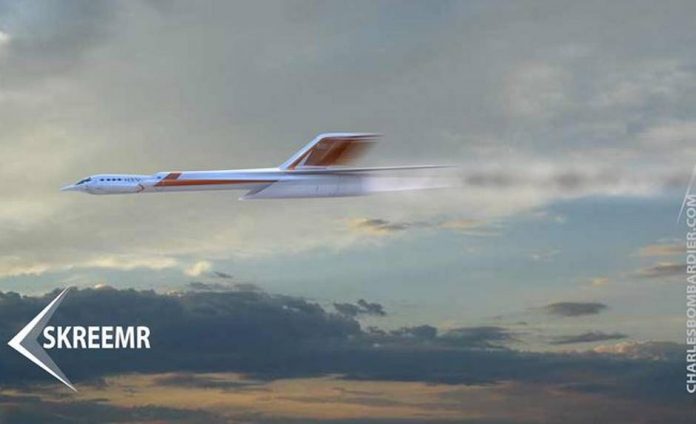 Charles Bombardier, a Canadian inventor-engineer, conceptualized a supersonic jet called Skreemr that could fly passengers from London to New York in half an hour. Along with Ray Mattison, Skreemr designer from Design Eye-Q, Bombardier conceives the aircraft’s engine to be built using screamjet technology that would give the Skreemr the potential to travel up to 10 times the speed of sound, around 7,673 mph, according to The Globe and Mail.

Bombardier envisions a passenger Skreemr craft with four wings and two rear-end rockets to fly at Mach 4 speed, twice that of the Concorde, which is no longer in service.

BGR explains that, since the concept supposes the plane to take off from an electric launch system to give it a speed of Mach 4, it would also mean that its passengers would have to deal with “tremendous G forces.” The design would also have to use material that can withstand intense heat, because flying at increased acceleration in low altitudes could make the plane go up in flames.

So far, the screamjet technology is still being tested, and engine designs are developed in the United States and China for military consumption. It would still take years for this endeavor to reach the factory production stage of just drones; thus, commercial use, if ever, may take a while.

But the vision is for such an aircraft to fly across continents at five times the speed of the Concorde. The magnetic railgun would launch the aircraft on clean electricity while the screamjets could utilize hydrogen manufactured with hydro-electricity.

A lot of buzz is up with the idea of supersonic travel which can cut travel time in half, as Bombardier envisions for the Skreemr. And he is not the only one re-imagining supersonic jets for viable travel. Airbus is also working on the reboot of the Concorde, having been awarded a patent on which designs for a Concorde 2 have been based.