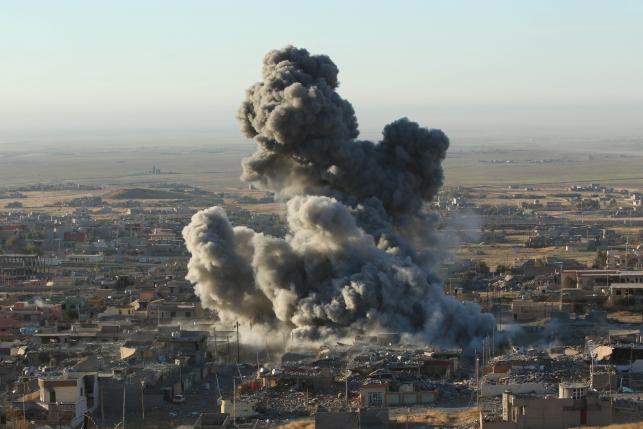 Kurdish forces backed by U.S. air strikes declared a major victory last month over Islamic State after cutting access to a key supply route in northern Iraq. Yet days later the militants were back in business, underscoring their resilience in the face of defeat.

The insurgents found an alternate, partly unpaved, route further south and trucked in gravel and dirt to reinforce it with the help of local workers, truckers and residents told Reuters.

The detour takes longer to traverse than Highway 47 and could still wash out in heavy winter rains, they said.

But for now it is enough to keep food, fuel, weapons and fighters flowing between Mosul and Raqqa, the group’s main strongholds in Iraq and Syria.

The vast battlefield in those two countries, combined with Islamic State’s nimbleness in responding to logistical setbacks, helps explain the slow pace of U.S.-led coalition operations.

Cutting off Highway 47 was “as important as targeting a very senior ISIS (Islamic State) leader. The coalition had to do it,” said Ahmed Ali, researcher at American University of Iraq.

“But the fact that now you have this new route means the coalition will be easily discredited or seen as not serious by the population.”

That has been a persistent criticism over the past year in which the international coalition, which includes more than 60 countries but relies heavily on American resources, has been striking Islamic State targets in Iraq and Syria.

It took the coalition’s Kurdish allies only 48 hours to seize the road by capturing the town of Sinjar through which it passes, though it had taken months of bombing to weaken the militants sufficiently to enable that feat.

U.S. Army Colonel Steve Warren, spokesman for the U.S.-led coalition, said having control of the road meant the Kurds could now facilitate the passage of humanitarian and civilian goods while preventing the transport of weapons and fighters.

“There are plenty of rat lines and back roads and smuggling routes, but… there’s much less civilian traffic on those routes so they’re easier for us to monitor and strike and they’re more difficult for Daesh to use,” said Warren, using an Arabic acronym for Islamic State.

A source in the Kurdistan regional security council, however, said while it was now impossible for Islamic State to use Highway 47, there was no longer any civilian traffic on the road either.

The Kurds have blocked the road in at least five places between Sinjar and Kirkuk, about 250 km (155 miles) to the southeast, he said, confirming that Islamic State was using an alternative route through southern areas that took longer.

“If a convoy of vehicles come out of an ISIS territory or staging ground towards one of the Peshmerga positions on Highway 47 then they’re just going to bomb it,” said the Kurdish security council source, referring to coalition aircraft.

A local resident said civilians now felt it was much too dangerous to use the road.

Yet with civilian and commercial traffic forced off Highway 47 and onto the same back roads used by Islamic State, the coalition will likely face the familiar challenge of striking the militants without killing bystanders.

One driver, who like the others spoke on condition of anonymity, said he had seen four or five trucks carrying fruit and vegetables destroyed by an air strike last week before entering Iraqi territory en route from Raqqa in Syria.

Warren said he was not aware of the alleged strike, but added it was not uncommon for Islamic State to use civilians as human shields. Reuters was not able to independently verify the alleged attack.

The coalition says it uses stringent rules of engagement, which some have criticized for slowing the pace of battle. British-based monitoring group Airwars estimates between 332 and 498 civilians have been killed in Iraq nevertheless, citing publicly available sources and cautioning that the security situation makes the numbers hard to verify.

Prices of food and fuel doubled in Mosul, a city of around 1.5 million, after Highway 47 was cut, but it took less than a week before new routes restored stability to the market, a merchant in the northern city said.

There are fears that cutting off ordinary supplies to Mosul would threaten the civilian population. Islamic State could use price increases or shortages of food or fuel to turn residents against the coalition, say analysts.

Truck drivers told Reuters the new route sets out from the southwest of Mosul, turning sharply south to the town of Tel Abta.

From there, the paved road turns into a series of dirt paths stretching about 60 km to Kirwan town in a sprawling desert area about 20 km from Kurdish frontlines in Sinjar.

The dirt roads are unfit for large trucks when it rains, and with winter underway the rains could start at any time. A driver and a local farmer said militants had begun laying heavier stones to try and guard against flooding.

From Kirwan to the Syrian border, the road is paved again, the drivers said.

While the new roughly 350-km (220-mile) route is not much longer than the old one running through Tel Afar and Sinjar, the drivers said poor road conditions have nearly doubled the time it takes to traverse to at least 12 hours.

One driver said he is also worried the new route will be cut if the Kurds extend their anti-IS offensive south from Sinjar toward Kirwan and Ba’aj. Any other alternative would take even longer.