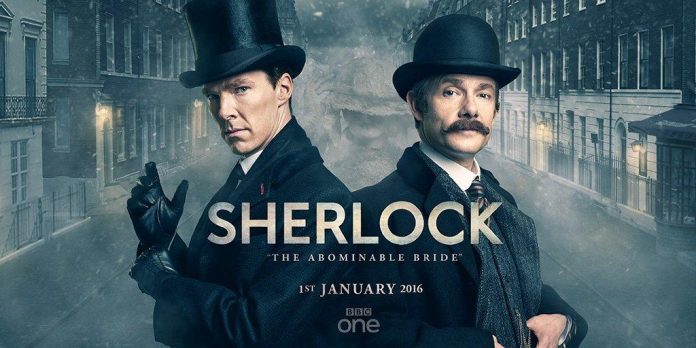 With “Sherlock” season 4 still a long way in coming, fans will have their dose of the show in the interim through a holiday special episode.

The “Sherlock” special episode called “Sherlock: Abominable Bride” will premiere on Jan. 1, 2016 and will air a two-night event special on Jan. 5 and 6 on the big screen. The creators of the show will throw in an additional footage of 20 minutes that will feature exclusive behind-the-scenes videos with Benedict Cumberbatch, who plays Sherlock, Martin Freeman, who portrays Dr. Watson, and a set tour from executive producer Steven Moffat, according to Mashable. Tickets started to go on sale on Nov. 6.

“Sherlock is a little more polished,” said Moffat in the press tour of the Television’s Critic Association, noted iDigital Times. “He operates like a Victorian gentleman instead of a posh, rude man. He’s a lot less brattish.”

On the other hand, Dr. Watson will be “more uptight.” As for the setting, the standalone episode will take place around the 1890s when “Sherlock Holmes” author Sir Arthur Conan Doyle originally penned the story.

Meanwhile, the fourth season of “Sherlock” will focus on “consequences.” Moffat said that it will be “dark in some ways – obviously it’s great fun and a Sherlock Holmes romp and all that but there’s a sense of … things … coming back to bite you. It’s not a safe, sensible way to live. It’s hilarious and exhilarating some days, but some days it’s going to be bloody frightening.”

As reported by Variety, Moffat revealed that “once Benedict Cumberbatch gives up ‘Sherlock,’ they will also be stopping the show.”

The production of season 4 will start spring next year, while the premiere could go as far as January 2017.

How to get away with Murder season 2 news: new season...