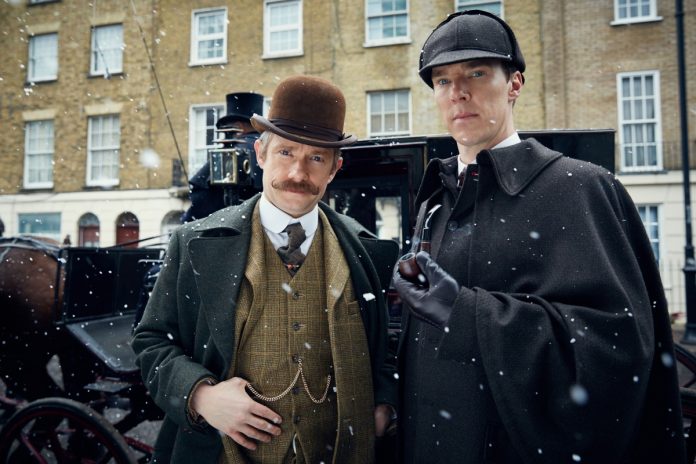 Only about a month before the special holiday episode of BBC’s “Sherlock” airs, the official plot and numerous photos of the Victorian-themed special are being revealed online.

After the release of a roundtable interview where leads Benedict Cumberbatch (Sherlock Holmes) and Martin Freeman (Dr. John Watson) shared their sentiments in filming the show in a different era, a legitimate synopsis has been released by Masterpiece to the delight of the show’s fans. The official teaser plot reads,

We’ve been here before – but what if this wasn’t the modern day but the late Victorian period? What if the world’s most famous consulting detective and his best friend lived in a Baker Street of steam trains, hansom cabs, top hats and frock-coats?
Welcome to ‘Sherlock’ in 1895!

Some things, though, remain reassuringly the same. Friendship, adventure and especially,murder…

Why is Thomas Ricoletti a little surprised to see his wife dressed in her old wedding gown? Because, just a few hours before, she took her own life…

Mrs Ricoletti’s ghost now appears to be prowling the streets with an unslakeable thirst for revenge. From fog-shrouded Limehouse to the bowels of a ruined church, Holmes, Watson and their friends must use all their cunning to combat an enemy seemingly from beyond the grave and the final, shocking truth about… the Abominable Bride!”

Despite the official synopsis, the underlying question of how Holmes and Watson ended up in the 1890s is still unknown. Given how the show has a way of instilling mind boggling plot twists, viewers can only speculate so much on what brought them to a time when the “Sherlock” stories were originally set.

On top of that, the official posters of the lead characters as well as stills from the episode have been swirling on the Internet, hyping up on what would be a treat for “Sherlock” fans.

It will be a unique experience to see how Sherlock and John would be solving a case without the use of paraphernalia that they are used to in the modern era. Furthermore, the effort and eye for detail from Freeman’s mustache to the foggy streets in order to make sure that the show will achieve the 1890s feel are truly astounding.

“Sherlock: The Abominable Bride” will air on Jan. 1 on BBC One, PBS, and in select theaters.

'Orange Is the New Black' season 5 spoilers: filming underway for...