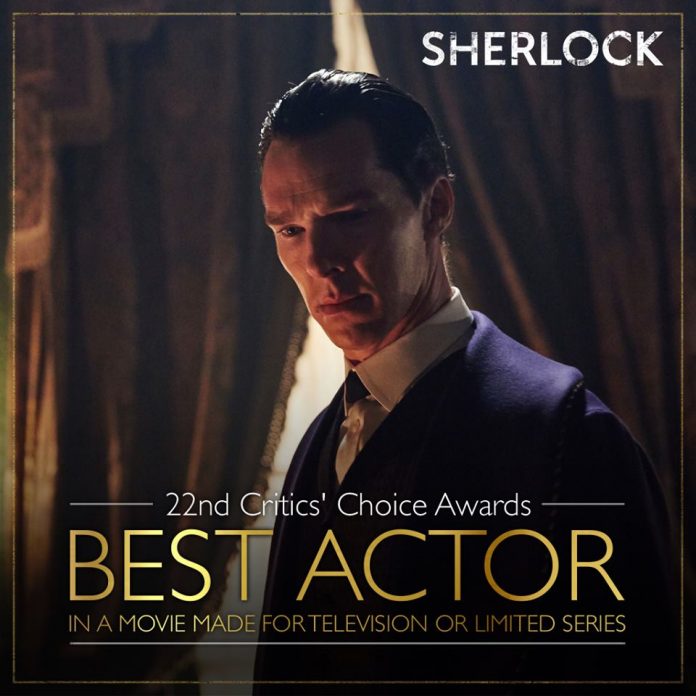 Entertainment Weekly shared the six new images which include an extended family portrait showcasing Baby Watson cradled by dad Watson, his wife Mary (Amanda Abbington) and the titular sleuth (Benedict Cumberbatch) looking befuddled as he stares at the newborn.

The pictures also gave the first look at the touted new villain, Culverton Smith, played by Toby Jones. In a previous interview, executive producer Steven Moffat described the antagonist as “the darkest villain we’ve had. There was always something charming and engaging about Moriarty [Andrew Scott]. There was something fascinating and actually amoral, rather than immoral, about Charles Augustus Magnussen [Lars Mikkelsen]. This guy is the purest evil.”

Speculations suggest that due to the increasing popularity of the main stars, it seems that the new installment may be the last run of the series. On the November issue of British GQ, Cumberbatch talked about wrapping up production which he shared felt like “the end of an era” for him.

“It might be the end of an era. It feels like the end of an era, to be honest. It goes to a place where it will be pretty hard to follow on immediately,” he said, adding that he is still open to reprising the role alongside Freeman.

“We never say never on the show. I’d love to revisit it, I’d love to keep revisiting it, I stand by that, but in the immediate future we all have things that we want to crack on with and we’ve made something very complete as it is, so I think we’ll just wait and see. The idea of never playing him again is really galling,” he concluded.

Season 4 of “Sherlock” is slated to hit the small screen on Jan. 1, 2017, starting with the episode titled “The Six Thatchers.”