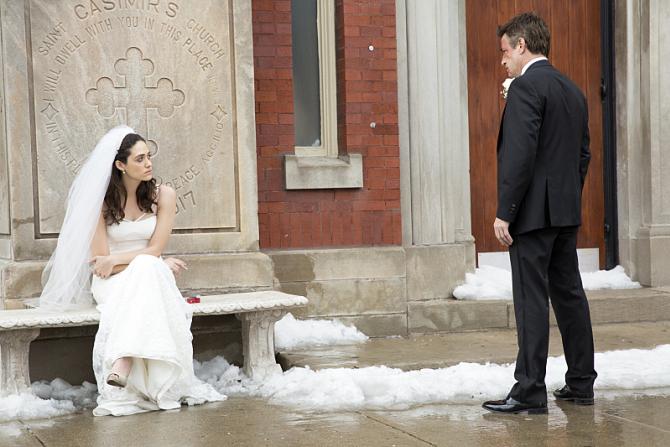 “Shameless” left fans brokenhearted and frustrated at Frank (William H. Macy) who has once again found a way to ruin things for his family – even eldest daughter, Fiona’s (Emmy Rossum) supposed big day.

The season ender titled “Familia Supra Gallegorious Omnia!” saw Fiona’s new life crumbling in front of her while wearing her wedding gown, no thanks to her father. Although Frank’s previous plans of killing Fiona’s husband to be, Sean (Dermot Mulroney), was foiled, the Gallagher patriarch still managed to stop the wedding by outing Sean’s substance abuse secret on his daughter as he gate crashed the festivities. Cornered, Sean had no choice but to admit that he was indeed a junkie, even revealing that he had took something in just before the wedding ceremony to take the edge off. In the end, Fiona and Sean decided to part ways, ironically, while still on their wedding attires.

“In his own sick and twisted way, he believes he’s a good dad and was doing the right thing,” Pimental told The Hollywood Reported in an interview. “But he’s a sociopath who sees it that way. It’s so frustrating to the family and Kev and Vee that he never gets it.”

Moving forward to season 7, it is still unsure if the former couple still has any chance of patching things up and getting back together as it looks like Fiona is already done with Sean. The substance abuse is an especially touchy subject in the Gallagher family given Frank’s undying addiction to it. However, series star Jeremy Allen White, who plays Fionna’s borther, Lip, in the series thinks that there might be something special going on between his on-screen sister and Sean that can potentially lead them back to each other’s arms.

“I think there’s something there with Sean and Fiona. I think they have to take care of their own s*** a little bit more when she yelled that at him during their fight [in “A Yurt of One’s Own”], I think something clicked in Sean’s head where he was like, ‘I want to marry that woman,'” White spilled to Entertainment Weekly .

“I don’t know if there’s a part of me that’s like, rooting for them even though he’s been doing heroin this whole time, but I don’t know. I really don’t know,”

There is no offficial announcement yet on when “Shameless” season 7 will debut on Showtime.

'Vikings' season 4 spoilers: Ragnar, Rollo face each other in a...