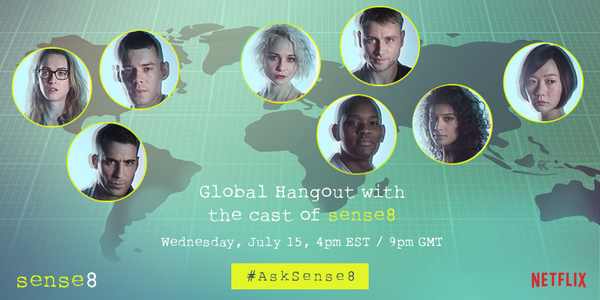 Sensies are still highly anticipating the news of renewal for season two of breakout science-fiction series, “Sense8,” from the online giant streaming site Netflix. To show their support, they launched a social media campaign recently.

Fans took it to Twitter to voice their hopes using the hashtag “#RenewSense8” on July 7. Posting their thoughts on the campaign, they said that they are concerned over the lack of an announcement from the site especially since the show has received mixed reviews from the critics.

While others are pointing out that the story of eight people from around the world who are linked mentally and emotionally as they experience empathy towards one another, is refreshingly unique in TV.

Although there is no confirmation yet, executive producer J. Michael Straczynski revealed during his appearance at San Diego Comic Con that the show may be up for renewal and he will know in the next two weeks if Netflix ordered a new season. He said he is hopeful because Netflix representatives told him that the first season is being watched “straight through — three, four, six times,” Comic Book Resources reports.

He added that the 12-episode series he co-created with Andy and Lana Wachowski was a pleasure to make, “It’s such a pleasure dealing with gender issues, privacy issues, sexuality issues that really have not been seen before [on television.]”

Straczynski also mentioned that what makes the cast amazing is the way they have filmed the show at its actual locations, “You do a scene, then do whole scene in exactly the same way six months later in another country for other side.”

The two-minute title sequence has also been shot and are not stack photos contrary to what some people speculate.

TV Trippin reports that more than 100 scenes are included, with most of them shot by Lana’s partner, Kate Winslow.

“My directive from Lana was to go out and describe each country by what you see; find the nuances, find the food, find what people are doing, get a feel for the place. It was one of the funnest things I’ve ever done in my life,” she said.

Probably to help curb the anticipation of viewers, the show is hosting a live Google Hangout on July 15 for question and answer session with some members of the cast.

'Once Upon a Time' season 6 premiere spoilers: Rose McIver wants...