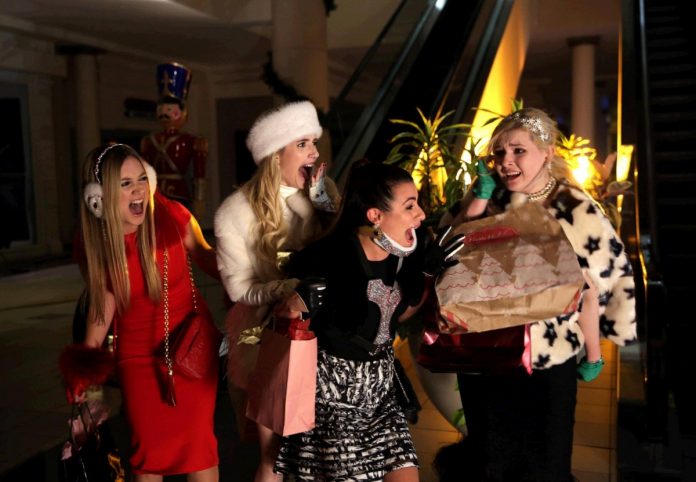 The news of Emma Roberts reprising her role as Chanel Oberlin on “Scream Queens” season two is old news.

However, the latest news about “Scream Queens 2” is that almost all the original cast members will be making a comeback for Fox’s horror-comedy second season run. This news was confirmed after other cast members, namely Lea Michele, Billie Lourd, Abigail Breslin, Keke Palmer and Jamie Lee Curtis, made it public at the “Scream Queens'” panel during the PaleyFest 2016 that they will be reprising their respective roles in the series.

Apart from the confirmation of the above-mentioned stars, the second season of the show will also feature Niecy Nash anew, reprising her fan-favorite character Denise Hemphill. This was confirmed earlier by Nash herself as she announced  her inclusion in “Scream Queens” season two on her Twitter account.

Glen Powell is also set to return and reprise his role as Chad.

While the upcoming season two of “Scream Queens” is already expected to be a gathering of old and familiar faces from its season one run, the same thing cannot be said about the fate of Skyler Samuels’ Grace and Oliver Hudson’s Wes Gardner characters. As of this writing, no news confirming the participation of the said characters is available.

It was reported earlier that the upcoming season two will be set in an asylum, moving away from its campus setting during the show’s first season run. “Scream Queens” co-showrunner Brad Falchuk reveals that the show’s hospital setting is inspired by the classic horror movie “Halloween,” which, incidentally, is top-billed by one of “Scream Queens” actresses, Curtis.

Falchuk further reveals that the hospital will be helmed by Curtis’ Dean Cathy Munsch after she traveled the world in search for a new mission.

Meanwhile, it was reported earlier that the show will also introduce four new characters as presumably good-looking and hot doctors in their late 20s or early 30s. However, as of this writing, the identities of the actors who will play the roles are still under wraps.

Viewers can only guess as to how these new “hot characters” will be woven into a plot that will feature the Chanels’ pursuit to become doctors.

“I mean I hope there’s four hot doctors because I feel like if there is anything season two needs it’s four hot doctors… I know that if Ryan Murphy does one thing well it’s casting amazing, talented and really hot people. He always casts the cutest boys!” says Roberts in an earlier interview.