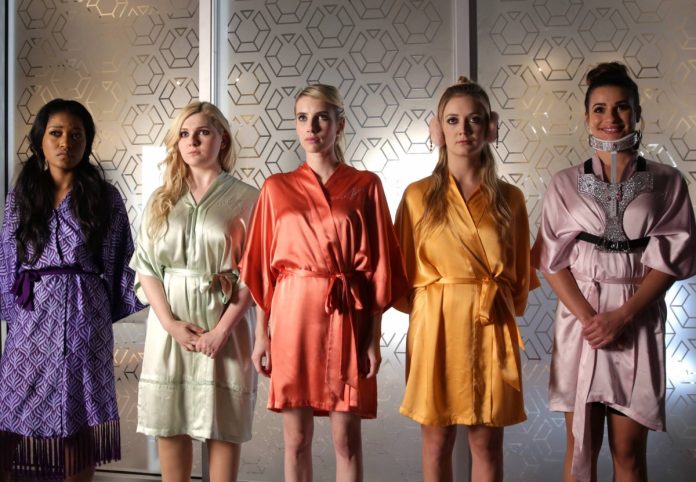 The Kappa sorority girls are back  and they’re ready to do their favorite thing: shopping. Black Friday is here and even though their Thanksgiving didn’t turn out so well, nothing is going to spoil their fun, or so they think.

Spoilers Guide offered a summary of the upcoming episode, which reads, “After the horror-filled events of Thanksgiving, the Chanels decide to celebrate their favorite holiday  Black Friday, but the Red Devil has plans to stop their shopping spree.”

Chanel (Emma Roberts) and her loyal followers leave the campus for a Black Friday shopping spree, but things don’t turn out the way they planned. Instead of purchasing moderately discounted items, the girls of the Kappa Kappa Tau sorority find themselves trapped inside the mall and looking for a way out.

The promotional video shows Chanel shouting, “Oh my God! We’re locked in!” when she discovers that the shopping center’s door has been locked shut, with the Red Devil killer hunting them down on top of that. Chanel remains fierce, however, arming herself with a crossbow as a weapon as she faces the serial killer, genuinely annoyed that she won’t be able to snag the best deals.

Meanwhile, after Zayday (Keke Palmer) and Grace (Skyler Samuels) conclude that Dean Munsch (Jamie Lee Curtis) is the killer, they hatch a scheme to stop her for good.

“Killing Dean Munsch is the best thing to do,” Zayday explains.

While all this is going on, a duel is forming over by the Dickie Dollar Scholars as Chad (Glen Powell) challenges Pete (Diego Boneta) to a fight.

The synopsis also states that one of the show’s characters will confess to being the murderer close to the end.

The new episode is aptly titled “Black Friday” and will air on Fox on Tuesday, Dec. 1 at 9 p.m. EST.