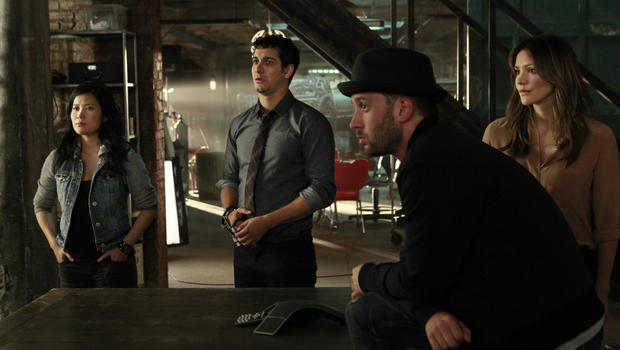 In the next episode of “Scorpion” on CBS that will air on October 5, Team Scorpion gets in trouble in the middle of a mission.

The synopsis of Episode 3 titled “Fish Filet” as reported on The Futon Critic reads, “In order to save the lives of three judges, Sylvester goes undercover in a federal prison but Team Scorpion must break him out when his life is threatened.”

In the 23-second teaser uploaded on YouTube by TV Mania Promos, we see Sylvester getting dressed up and tattooed to fit his role as an inmate. As he faces a fellow prisoner taller than him, Sylvester said, “I would like to teach you a lesson, punk.” Of course, this does not go well for him as the undercover genius gets punched and knocked down.

In an interview with CBS News, Robert Patrick (Cabe Gallo) said, “There’s a lot of challenges for us. We’ve got a big event. We’ve got one of our guys [Sylvester] in a prison. And we gotta get him out.”

Katharine McPhee (Paige Dineen), meanwhile, said in the same interview that the second season of “Scorpion” is packed with more action and comedy. “It’s been really fun to work on the show with it being more just light-hearted. And I think everyone in the cast is enjoying the comedy side of the show… We are a drama but we’re kind of more of a dramedy meets action meets procedural.”

The series follows the events that happen following the recruitment of the team by the U.S. Department of Homeland Security to act as the last line of defense against high-tech threats that happen worldwide.

New episodes air every Monday at 9/8c on CBS.